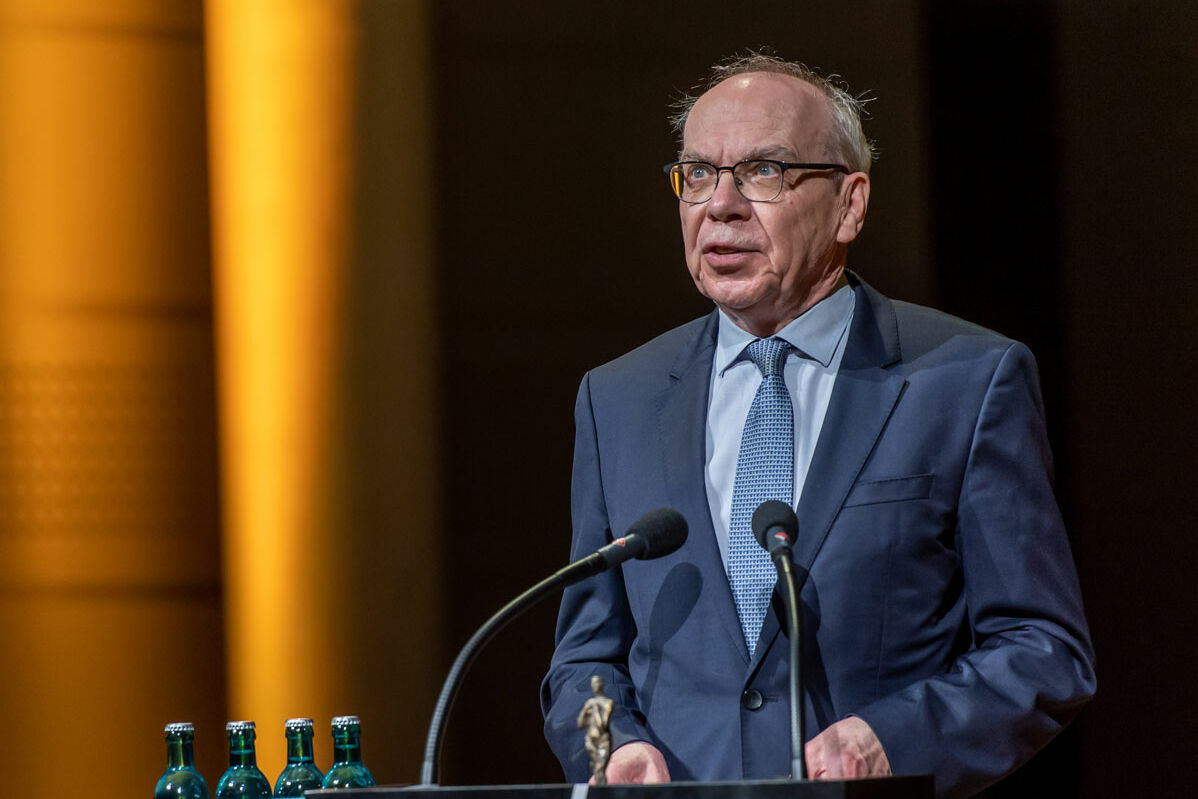 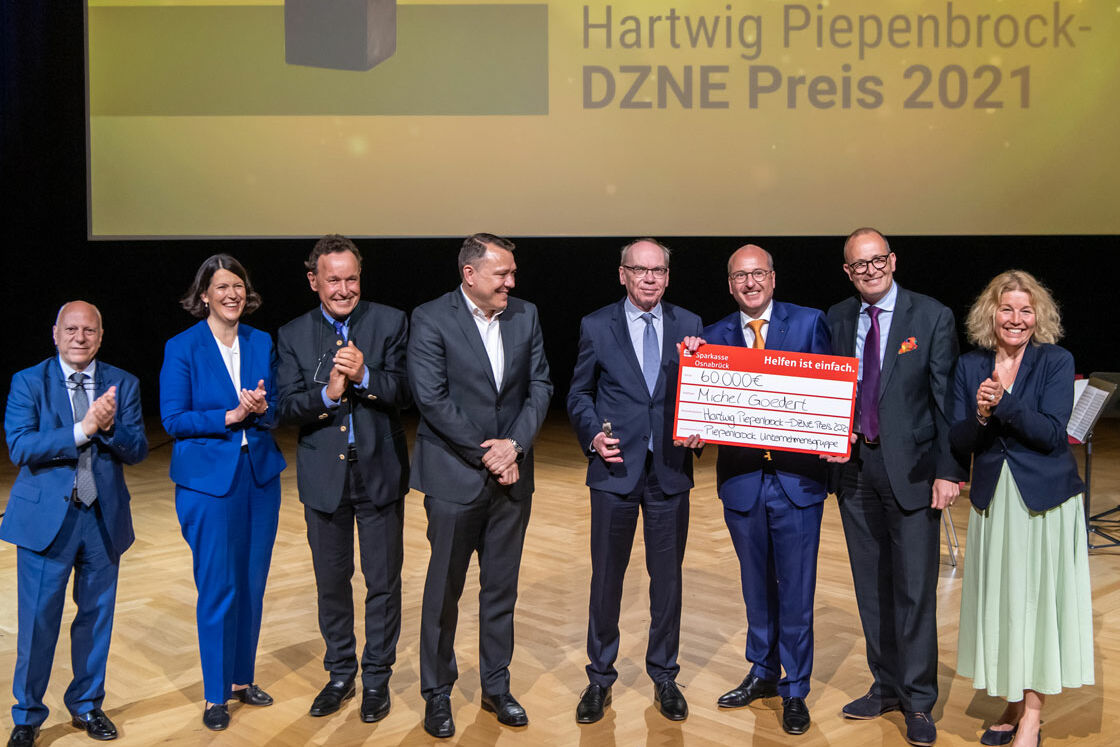 Bonn/Germany, May 10, 2022. This Monday, neuroscientist Michel Goedert from Cambridge, UK, received the “Hartwig Piepenbrock-DZNE Prize”, endowed with 60,000 euros. The award ceremony took place at the Bundeskunsthalle in Bonn in the presence of Thomas Romes, senior official in the German Federal Ministry of Education and Research (BMBF). Goedert was honored for his groundbreaking findings on the molecular mechanisms of neurodegenerative diseases such as Alzheimer’s and Parkinson’s. Born in Luxembourg, Goedert is a researcher at the MRC Laboratory of Molecular Biology in Cambridge. The award is presented jointly by the Piepenbrock Group and DZNE.

“Michel Goedert is a scientific pioneer who has contributed significantly to the understanding of the mechanisms of neurodegenerative diseases. His findings on protein aggregates as they occur in Alzheimer’s, Parkinson’s and other brain diseases are groundbreaking. This work provides deep insights into the development of these diseases and significantly helps in the search for better therapies. Such research is urgently needed, because so far there are no cures for neurodegeneration”, says Professor Pierluigi Nicotera, Chairman of DZNE’s Executive Board.

“The development of therapies against dementia and other neurodegenerative diseases is a daunting task. Despite this challenge, transfer to practical application must always be the goal. Ultimately, science should benefit the public. This is particularly true of medicine. That is why we support cutting-edge research in this field and DZNE in particular.

“The BMBF has been supporting research in the field of neurodegenerative diseases for many years, especially through the DZNE. This is because the development of therapies, e.g. against dementia, Parkinson’s and other neurodegenerative diseases, is a huge task in which we are still at the beginning in many cases. And also in this challenge, transfer to practical application must be considered from the very start, so that the results of research benefit the citizens as quickly as possible,” says Thomas Romes, senior official in the BMBF and Chairman of DZNE’s Council.

“Bonn is a powerful hub of neuroscientific research with the university and research centers such as DZNE. At the same time, as a home to international institutions, Bonn is an example of world openness. I am pleased that Bonn’s internationality is reflected in the Hartwig Piepenbrock-DZNE Prize, which over the years has also repeatedly honored outstanding experts from abroad. As in the current case,” says Katja Dörner, Mayor of Bonn.

“With the Hartwig Piepenbrock-DZNE Prize, we want to bring outstanding research results on Alzheimer’s and other neurodegenerative diseases to the fore and honor the scientists behind them,” says Olaf Piepenbrock, Managing Partner of the Piepenbrock Group. “Public discussions are also important to us. We want to talk about dementia. In the society and together with patients and relatives. Neurodegenerative diseases mean enormous physical and psychological burdens. In addition to supporting cutting-edge research, we therefore see our task as ensuring a better understanding of the needs of people with Alzheimer’s and their family members.”

Since 2011, the “Hartwig Piepenbrock-DZNE Prize” has been awarded every two years for outstanding research on neurodegenerative disorders. These diseases, which include Alzheimer’s, Parkinson’s and Amyotrophic lateral sclerosis (ALS), are characterized by dysfunctions and death of neurons. This can lead to dementia, movement disorders or other severe health problems. To date there are no cures. The prize is sponsored by the Piepenbrock Group and awarded in remembrance of its former Chief Executive Officer and Chairman Hartwig Piepenbrock, who passed away after suffering from dementia. He was committed to the arts, science, and society for many years. Prize winners are selected by an international committee, coordinated by DZNE. On this occasion, the prize was awarded for the sixth time.

Michel Goedert was born in Luxembourg in 1954. He went to Medical School in Basel, Switzerland, and received a PhD in pharmacology by the University of Cambridge, UK. In 1984 he joined the Medical Research Council (MRC) Laboratory of Molecular Biology in Cambridge as a postdoctoral fellow. He has been Programme Leader there since 1988. Goedert’s research focuses on the mechanisms of neurodegenerative diseases, in particular on protein molecules that naturally occur in humans but accumulate in the brains of patients in an abnormal manner. In this context, Goedert has been studying the tau protein and the alpha-synuclein protein.

Normally, tau proteins stabilize transportation routes within neurons. However, in Alzheimer’s and several other brain diseases, tau proteins detach from the cytoskeleton and agglomerate, forming insoluble aggregates. Goedert made a key contribution to understanding this phenomenon by showing that tau proteins are an essential constituent of the filamentous deposits that occur in the brains of people with Alzheimer's disease. Moreover, he found gene mutations that lead to defective tau protein and ultimately to dementia. His studies also provided evidence that tau aggregates can spread throughout the brain in a chain reaction in which new aggregates are constantly formed.

In addition, Goedert demonstrated that the alpha-synuclein protein is the main component of microscopic deposits which occur in the brains of individuals with Parkinson’s disease, Lewy body dementia and so-called multisystem atrophy. Moreover, his studies provided crucial insights into the molecular structure of alpha-synuclein aggregates and, similarly to the case of the tau protein, evidence that these aggregates can gradually spread across the brain, advancing disease progression.

About the Deutsches Zentrum für Neurodegenerative Erkrankungen (German Center for Neurodegenerative Diseases): The DZNE is a research institute funded by the German federal and state governments, comprising ten sites across Germany. It is dedicated to diseases of the brain and nervous system, such as Alzheimer’s, Parkinson’s, and ALS, which are associated with dementia, movement disorders and other serious health impairments. To date, there are no cures for these diseases, which represent an enormous burden for countless affected individuals, their families, and the healthcare system. The aim of DZNE is to develop novel strategies for prevention, diagnosis, care, as well as treatment, and to transfer them into practice. To this end, DZNE cooperates with universities, university hospitals, research centers and other institutions in Germany and abroad. The institute is a member of the Helmholtz Association and belongs to the German Centers for Health Research.

About the Piepenbrock Group: The Piepenbrock Group has represented professional building services for more than 100 years. Managed by the fourth generation of owners, Piepenbrock today offers a broad spectrum of services in Facility Management, Cleaning Services, Maintenance and Security. Piepenbrock is also one of Germany’s leading providers of special services, which includes clean room cleaning, winter services and park maintenance. Quality and sustainability are two important aspects that ensure the company remains at the top of its game.