„Fat Jam“ in the Cell 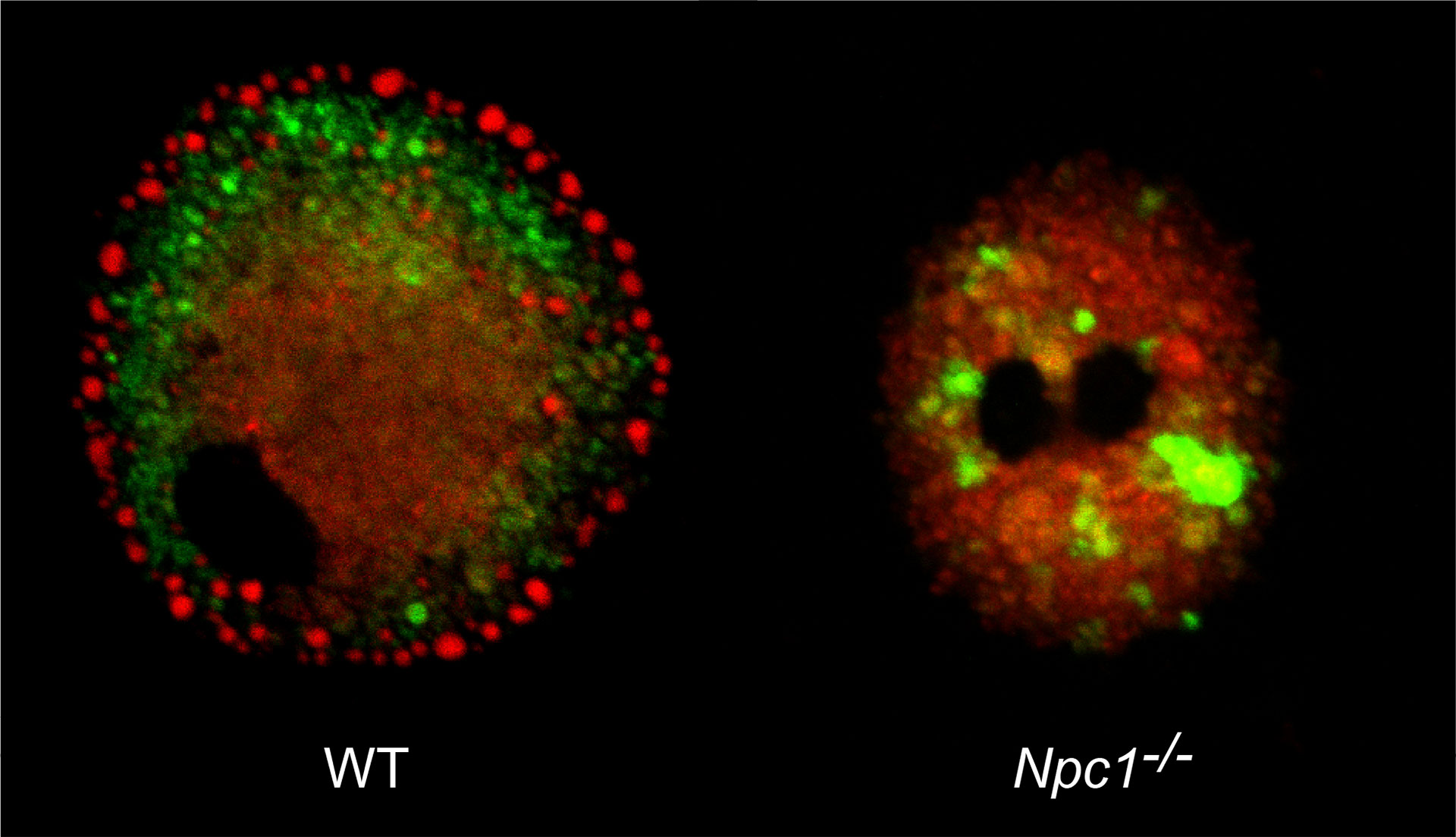 A microscopic view on microglia reveals disturbances in how these phagocytic cells, which belong to the brain’s immune system, cope with inhaled lipid material. On the left: wildtype microglia (WT), on the right: microglia with features of NPC disease (Npc1-/-). Source: DZNE / Tahirovic Lab / Lina Dinkel

Munich/Germany, February 24, 2021. In the journal “Nature Communications”, scientists of the German Center for Neurodegenerative Diseases (DZNE) report new findings on the mechanisms of “Niemann-Pick type C disease” (NPC). This rare brain disorder mainly manifests in childhood and includes severe neurological and psychiatric symptoms. Researchers led by Dr. Sabina Tahirovic have now found evidence that already at an early stage, NPC is associated with neuroinflammation and that this condition is triggered by impaired intracellular lipid transport. In addition, they identified pathological features in the blood of affected individuals that in the future could assist to better monitor the course of the disease and response to therapy.

NPC is a hereditary metabolic disorder and among the rare diseases. In Germany, it is estimated to affect several hundred people. In these individuals, fat molecules - known as lipids - accumulate in their brains and other organs such as the liver. The consequences are severe: ranging from psychoses, epileptic seizures, disturbances in movement and coordination to cognitive impairments and dementia. “NPC mainly manifests in childhood,” said Dr. Sabina Tahirovic, a research group leader at the DZNE’s Munich site. “Current therapies can alleviate symptoms somewhat, but cannot sustainably halt progression of the disease. Many patients affected by NPC die before they reach adulthood.”

NPC is caused by defects in one of two genes: NPC1 and NPC2. Both are essential for the lipid recycling and the brain is particularly sensitive to such defects . In NPC, brain cells become overloaded with cholesterol and other lipids, leading to dysfunctions and, in the long term, to the death of neurons. The immune cells of the brain, the microglia, are also affected by the disease. Microglia trigger inflammatory processes; experts refer to this as “neuroinflammation”. “Until now, the reaction of microglia was considered to happen at late disease stages. We have now found that neuroinflammation occurs ahead of neuronal loss,” Tahirovic explained. “Thus, the inflammatory processes are not necessarily a response to neuronal damage, as anticipated. Inflammation starts before and appears to contribute to the disease progression.” The findings of Tahirovic’s team are based on studies in mice with defective NPC1 gene. Noteworthy, in humans, about 95 percent of NPC cases are due to flaws in this gene.

Microglia have a protective function that includes clearing cellular junk out of the way. However, the Munich scientists found that the immune cells behaved overly aggressively. “The microglia seemed out of control and more likely to do harm than good. In our experiments, they showed a tendency to over-ambitiously inhale cellular material,” Tahirovic said. In their search for the causes of this misbehavior, the researchers took a closer look at the processes inside the cells: with surprising results. “Until now, it has been assumed that the accumulation of lipids in NPC impairs the degradation machinery. However, our studies point to transport problems. This means that the lipids could well be degraded, but on the way there, they get stuck in a molecular traffic jam,” said the Munich researcher.

In addition to these studies in mice, Tahirovic’s team also examined blood samples from patients with NPC. Thanks to a collaboration with the Department of Neurology at the Ludwig-Maximilians-Universität München, the researchers were able to analyze blood from a total of seven patients. “This is quite a large number because NPC is so rare,” Tahirovic pointed out. ”Human microglia are difficult to access, this would require taking brain tissue. That’s why we looked at white blood cells. Specifically at so-called macrophages, they are close relatives to microglia.”

Indeed, numerous similarities were found between the macrophages of patients and the microglia of mice with NPC-like pathology - both in terms of molecular features and aggressive phagocytic behavior. “The macrophages appear to mirror key features of microglia. If they also respond in a similar way as microglia to therapies, they might be useful as biomarkers,” Tahirovic said. “This would expand the existing toolkit. Because presently, monitoring disease progression of NPC and response to treatments is essentially limited to observing clinical symptoms.”

Current approaches to treating NPC aim to reduce the amount of lipids in the cells. “Generally, this makes sense, because lipid overload is triggering the disease. However, our results emphasize the relevance of inflammatory processes. Insofar, the combination of lipid reduction and modulation of the immune response should also be considered in therapy development,” said Tahirovic.

The DZNE investigates all aspects of neurodegenerative diseases (such as Alzheimer’s and Parkinson’s and Amyotrophic lateral sclerosis) in order to develop novel approaches of prevention, treatment, and health care. The DZNE is comprised of ten sites across Germany and cooperates closely with universities, university hospitals, and other institutions on a national and international level. The DZNE is a member of the Helmholtz Association.

This research was supported by the NCL Foundation