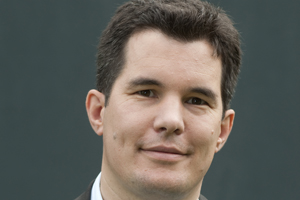 Bonn, December 14, 2016. Bonn-based neuroscientist Prof. Stefan Remy (41) will receive the “Consolidator Grant” from the European Research Council (ERC) worth EUR 1.8 million. The Grant is a special award because, apart from the high funding sum, the ERC's aim is to fund top-notch scientists with ground-breaking ideas. Stefan Remy plans to use the prize money on decoding single neuron function during behavior in mice. The objective of the project is to understand the functions of entire brain regions by deciphering the principles of signal processing of  the smallest computational units of the brain - the neurons – and connecting them to neuronal networks. Remy is a group leader at the German Center for Neurodegenerative Diseases (DZNE) with a chair at the University of Bonn.

To achieve this, the scientists have developed sophisticated methods that allow observing the brain and single neurons while processing signals. One objective is to share the data with other scientists at an early stage not only to further advance scientific understanding. Deciphering the neuronal code on the level of single neurons and larger networks could potentially guide the development of Brain-machine interfaces and neuro-prostheses which might be applicable for the treatment of symptoms of neurodegenerative diseases in the future.

“All of our thoughts, memories and emotions are encoded in our brains. If we can dissect the functions of individual neuronal networks, we have already taken a giant leap forward towards a better understanding of this fascinating but still enigmatic organ“, says Stefan Remy.

„Stefan Remy is a brilliant scientist. We congratulate him on being awarded the ERC Consolidator Grant, which recognizes the merits of his work and also gives him lots of freedom to continue to conduct his research. What makes this project particularly interesting is that it has the potential of becoming a template for many other projects,” comments Prof. Pierluigi Nicotera, the Scientific Director and Chief Executive Officer of the DZNE. “In order to be able to understand numerous neuronal diseases, it is extremely important to determine how nerve cell networks and entire regions of the brain work in conjunction with different behavior patterns.”

ERC Consolidator Grants support young principal investigators in their independent efforts to realize an ambitious research project on the basis of results that are already outstanding. These grants are aimed at those who want to further establish their research teams to continue a successful career in science. This year, the ERC has evaluated from 2,274 research proposals, out of which 314 scientists have been elected for funding.

Observing the brain while it operates – that’s a topic that does not only fascinate scientists, but anyone who is interested in the secrets of the brain for example on a philosophical level. Gaining insight into the brain is very difficult from a methodical perspective. Given its complexities, this is a true challenge. The foundation for neuroscientist Stefan Remy’s motivation to work on neuronal networks was laid when he worked on his doctorate thesis and received an Alexander von Humboldt scholarship at Northwestern University, USA. There he first began to observe the communication between individual nerve cells in isolated tissues.

Just recently, Remy published an article on the processing of speed information in the brain’s navigation center in the renowned research journal Nature Neuroscience. He plans to utilize the Consolidator Grant to take his research one step further: Stefan Remy and his team plan to investigate the input signals of individual nerve cells while the mouse is moving around freely in an environment. “Step by step we want to gain new insights into the functions of individual neurons in parallel to observing the behavior. With this information, we aim to generate a computer model, which will ultimately enable us to precisely predict single neuron and circuit function,” explains Stefan Remy. “We want to understand how a neuronal network operates, specifically in the brain’s navigation systems.”