Biomarkers from the blood for Alzheimer's diagnosis 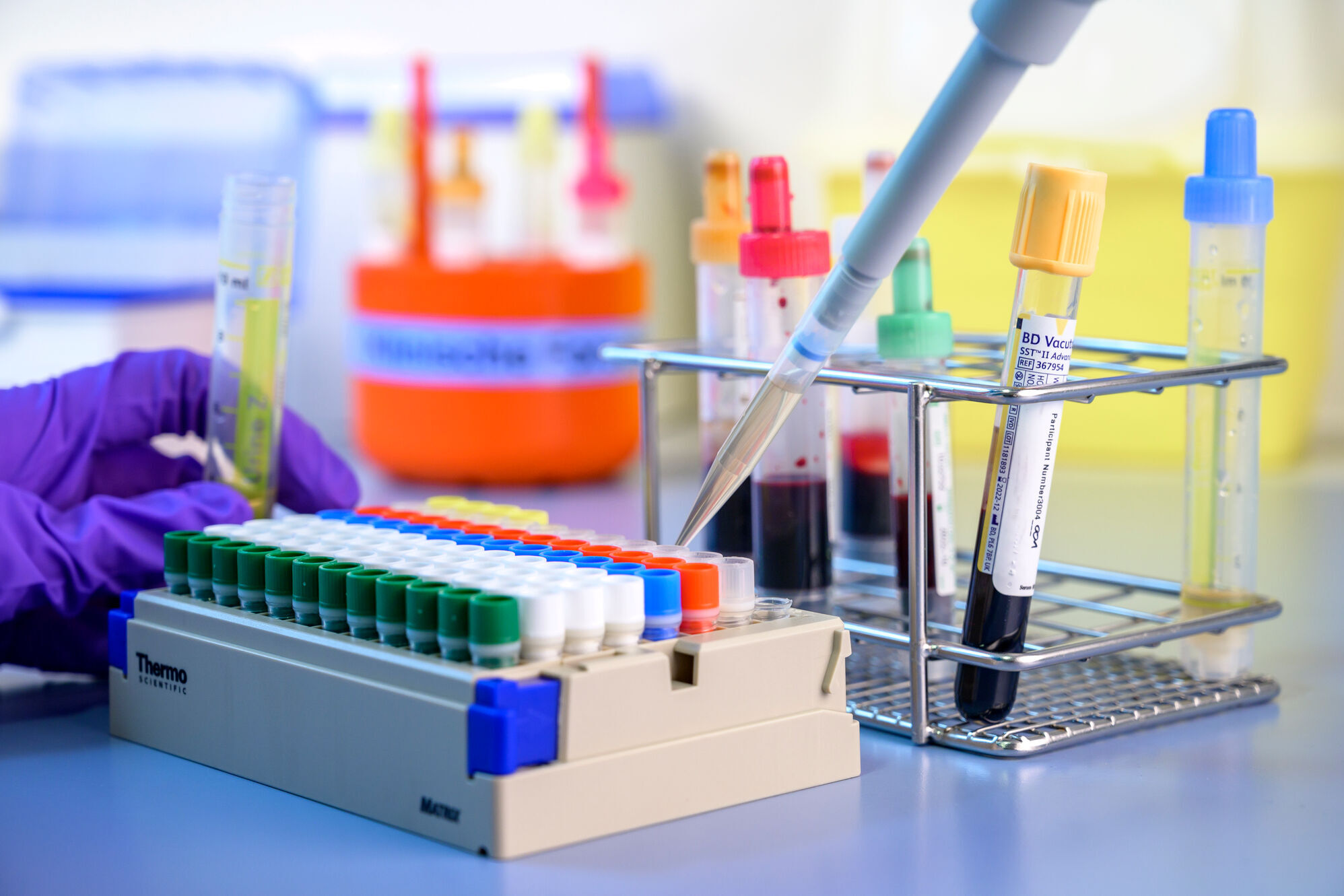 A research network led by the DZNE is investigating whether blood tests can be used to diagnose and predict Alzheimer's disease. Therefore about 3.000 blood samples will be analyzed.

Bonn, October 10, 2022. A new examination method could significantly simplify the diagnosis of Alzheimer's disease. For some time now, there have been data suggesting that the determination of protein changes in the blood could possibly make the examination of the cerebrospinal fluid superfluous. A research consortium led by the DZNE now wants to analyze these so-called biomarkers in the blood of several thousand patients to investigate whether they are equivalent to markers from cerebrospinal fluid for the diagnosis of Alzheimer's disease. Another hypothesis of the consortium of scientists is that the blood biomarkers may also help predict whether cognitive deterioration or even dementia will occur in the future in people with no or only very mild cognitive deficits. To do this, genetic risk factors will be considered in addition to protein markers. To develop this method, the researchers are being funded by the German Federal Ministry of Education and Research (BMBF) as part of the DESCARTES program with a total of 1.935 million euros.

"For our project, we can draw on more than 3,000 blood samples from various cohort studies," says Prof. Dr. Anja Schneider, who heads the project at the DZNE: "The cohorts include cognitively healthy individuals who have remained healthy over the course of many years or have progressed toward dementia. In addition, we have cohorts with Alzheimer's disease patients at different stages as well as cohorts of patients with other neurodegenerative diseases." These samples now form the basis for her team's work: the researchers analyze several proteins in the blood (amyloid ß42 and ß40 and phosphorylated tau) that are associated with the onset of Alzheimer's disease. At the same time, they are studying the NFL, which is associated with nerve damage. In addition, they use genetic information from the blood to calculate a so-called polygenic risk score - a calculated probability value for the occurrence of Alzheimer's disease. In addition to the researchers from the DZNE, the working groups of Prof. Dr. Alfredo Ramirez (University Hospital Cologne), Prof. Dr. Matthias Schmid and Prof. Dr. Michael Wagner (both University Hospital Bonn) and Prof. Dr. Oliver Peters (Charité, Berlin) are also involved.

However, the work in the new project is only just beginning with these analyses of the blood samples. The focus is on two questions. First, how reliably can blood samples be analyzed for biomarkers - especially if they were not taken under highly standardized conditions in university research centers, but rather in general practitioners' offices? And secondly, which of the blood biomarkers determined are most reliable - possibly also in combination with each other - when it comes to diagnosing Alzheimer's disease and predicting the subsequent occurrence of Alzheimer's dementia? The combined marker determined from this should form the basis for individualized diagnostics and therapy.

"Until now, blood samples from Alzheimer's patients have been taken in memory outpatient clinics, where they are quickly processed and frozen on dry ice or at minus 80 degrees," explains Anja Schneider. Thanks to this high effort, the results may be particularly reliable. However, this option is not usually available in general practitioners' offices, where samples are sent to laboratories at room temperature. How meaningful are the blood biomarkers in such samples? That is one of the questions in the study.

Thanks to the good data basis, the scientists can search for precise answers: From the long-term data collected over many years, it is possible to determine which of the initially healthy people subsequently became ill. It can be determined in whom the Alzheimer's disease took which course. The researchers can therefore retrospectively investigate how the later development of the disease correlates with which biomarkers from the blood samples taken at the very beginning.

For patients suspected of having Alzheimer's disease, a blood biomarker would be a great relief. With its help, it might even be possible to dispense with invasive procedures such as neural fluid testing altogether, or at least identify those who are most likely to benefit from it. Should therapies for the treatment of Alzheimer's disease one day become available, which, unlike the therapies already approved in Germany, combat the causes of the disease, these will certainly have to begin very early. For this purpose, too, a blood-based test could represent a less invasive method of identifying possible sufferers.