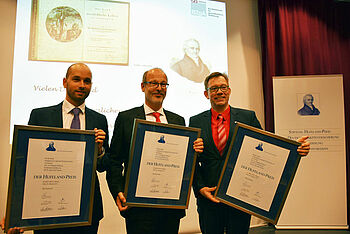 Berlin, October 5th , 2017 - Three DZNE scientists have received the “Hufeland Prize” of the Deutsche Ärzteversicherung, which is endowed with 20,000 euros: Prof. Wolfgang Hoffmann, Dr. Bernhard Michalowsky and PD Dr. René Thyrian accepted the award as representatives of the consortium “DemNet-D” which investigated dementia networks in Germany. The prize was presented in Berlin during the German Congress on Health Care Research.

The goal of the DemNet-D study was to identify determinants for successful dementia networks and provide evidence-based support for such networks. The study involved the DZNE’s sites in Rostock/Greifswald and Witten as well as other institutions. Its results were considered in a new German law to strengthen health care for people with dementia.