Why senile plaques form in the brain of Alzheimer patients 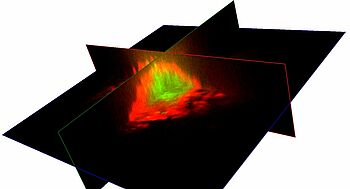 Bonn, September 21st, 2011. More than 100 years ago, Alois Alzheimer described the formation of so-called senile plaques in the brain of Alzheimer patients. It is known today, that a major component of these plaques is a protein called amyloid β, but what makes amyloid β lump up to form plaques is still up for debate. Research led by Michael Heneka, a scientist at the University of Bonn and the German Center for Neurodegenerative Diseases (DZNE), has now achieved a breakthrough on this issue. In a study published in the scientific journal "Neuron" Heneka and his colleagues describe that a chemical modification of amyloid β increases its tendency to aggregate and form senile plaques. The researchers found that the modified version of amyloid β is present in the core of senile plaques of both Alzheimer's patients and in a mouse model of Alzheimer's disease.

The amyloid β protein consists of a chain of 40-42 amino acids. The amino acid tyrosine, at position 10 of this chain, is present in all animal species that develop senile plaques – an indication that this residue plays a role in plaque formation. Heneka and his colleagues discovered that in Alzheimers disease, amyloid β is modified with the addition of a nitro group to tyrosine 10 via an enzyme called nitric oxide synthase 2 (NOS2). It has been shown previously that NOS2 is activated by an inflammatory response in Alzheimer’s disease, but Heneka and his colleagues were the first to investigate how this affects amyloid β. The researchers’ results suggest that inflammation can trigger the progression of plaque formation and Alzheimer's disease. It has been a long standing scientific debate whether inflammation is merely a consequence of Alzheimer's disease or also a cause. Heneka and his colleagues’ data now strongly argue for the latter.

In further studies, in a mouse model of Alzheimer's disease, the scientists show that loss of the NOS2 gene or oral treatment with an NOS2-inhibiting substance decreases the amount of nitrogenized amyloid β and protects the animals from learning deficits and memory loss. NOS2 inhibition may alter the progression of Alzheimer's disease and thus represents a potentially new therapeutic approach.