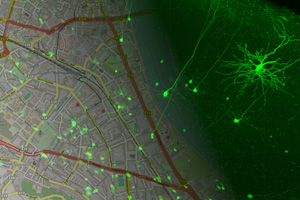 Bonn (Germany), December 6th, 2016. In order to guide us accurately through space, the brain needs a “sense” of the speed of our movement. But how do such stimuli actually reach the brain? Researchers at the German Center for Neurodegenerative Diseases (DZNE) have now identified a signal pathway in mice that feeds speed information directly into the brain’s navigation system. Scientists led by Stefan Remy report on this in the journal “Nature Neuroscience”. Similar neural pathways exist in humans. They are known to be damaged by Alzheimer’s disease – a possible explanation why spatial orientation is frequently impaired in this form of dementia.

In this study, the researchers stimulated specific areas in the brains of mice and recorded the evoked brain activity. “In previous studies, we found specific cells in the medial septum that fire at higher rates when the mouse moves faster. They function as ‘speedometer cells’. Possibly, they receive their input from deeper brain areas that are involved in motion control”, explains Professor Remy.

These neurons are connected to other brain regions via long-range projections. This includes an area called the “entorhinal cortex” which is considered to be the brain’s navigation center. “The computations needed to navigate in space are ultimately made in this area of the brain,” says Remy. “We have now been able to show that the rate at which the speedometer cells fire influences neuronal activity in the entorhinal cortex. When the firing rate increases, activity in the entorhinal cortex increases too. The speedometer cells act like a data bus, an interface that relays speed information directly to the brain's navigation center.”

Cause of spatial orientation disorders?

Humans have similar neural pathways connecting the medial septum and entorhinal cortex. Their function has not yet been investigated in detail; however, in the brains of Alzheimer’s patients these connections are known to degenerate early in the progress of the disease. “The symptoms of Alzheimer’s disease include spatial memory impairments. In such cases, it might happen that an affected person cannot find the way home,” says Remy. “Our results now provide a possible explanation for these symptoms: Information about the ongoing speed of movement is withheld and does not reach the brain’s navigation center.”