People with Parkinson’s show altered iron levels in their brains 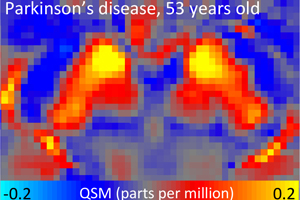 Magdeburg (Germany), November 25th, 2016. Iron occurs naturally in the human body. However, in people with Parkinson’s disease it distributes in an unusual way over the brain. This is the result of a study by the German Center for Neurodegenerative Disease (DZNE) that has been published in the journal “Brain”. Researchers headed by Professor Peter Nestor applied a special type of magnetic resonance imaging (MRI) allowing them to map iron levels in the entire brain – it is the first time this is done in Parkinson’s disease. This approach could improve the diagnosis of Parkinson’s and shine new light on the involved disease mechanisms.

Parkinson’s is a neurodegenerative disease characterized by movement disorders and potentially dementia at a later stage. Pathological hallmarks include damage to neurons and the presence of a protein called “alpha-synuclein”. However, the underlying disease mechanisms are far from being fully understood. “As yet we don’t know the causes for Parkinson’s. However, iron-mediated oxidative stress has been proposed as a potential pathomechanism,” says Julio Acosta-Cabronero, a postdoc researcher at Nestor’s lab at the DZNE’s Magdeburg site and leading author of the present publication. “For this reason, we looked for ways of mapping iron levels in the whole brain. This has not been done before in Parkinson’s. To date, iron analysis was limited to specific regions.”

Iron is indispensable for the human metabolism. It manifests e. g. in red blood cells, enzymes and particular proteins that serve as an iron deposit. However, iron is also potentially harmful as it is able to trigger production of reactive molecular species that may cause “oxidative stress” and ultimately damage to neurons.

For the current study, the DZNE researchers teamed up with colleagues from the University Magdeburg’s neurology department. Together, they examined the brains of 25 persons with Parkinson’s and 50 healthy subjects by using a special MRI technique called QSM, which is the acronym for “quantitative susceptibility mapping”.

QSM is a quite recent development. As with conventional MRI, it is non-invasive and relies on a combination of magnetic fields, electromagnetic waves and analysis software to generate pictures of the insides of the human body. However, QSM benefits from raw data usually discarded in conventional MRI. As a consequence, QSM can probe a magnetic parameter indicating metallic presence. “QSM shows how magnetic susceptibility varies across the brain. In our study, this is mainly caused by local variations in iron concentration. The bottom line is that we are mapping the spatial distribution of iron in the brain,” Acosta-Cabronero explains.

“MRI in neurodegenerative diseases has mostly focused on measuring the degeneration itself, meanwhile we know extremely little about its causes. We hope that by probing with new approaches such as whole-brain QSM, we may be able to get clues to the mechanisms of disease,” Peter Nestor says.

By matching the brain scans of patients and healthy controls, the researchers were able to identify pathological changes. “In Parkinson’s patients we found excess iron, as expected from previous studies, in the substantia nigra but also in extensive areas of the neocortex,” Nestor says.

In contrast, standard MRI showed no significant differences between people affected by Parkinson’s and healthy study participants. In addition, QSM revealed anomalies also in areas that until now have attracted little interest in Parkinson’s. “There is a region in the lower brain called dentate nucleus, which is normally iron rich. Yet, our whole-brain approach indicated decreased iron content in this area in Parkinson’s patients - extremely so in some individuals - highlighting how this method can open new avenues of investigation in Parkinson’s disease,” Nestor says.

This approach, the neuroscientist believes, might also be suitable for clinical routine: “QSM relies on measurement data that standard MRI does not make use of. However, most clinical scanners would in principle be able to acquire and save this information for further processing. Therefore, whole-brain maps that reflect the landscape of magnetic susceptibility could potentially serve as biomarkers for disease. In other words: QSM might help to improve the diagnosis of Parkinson’s and related disorders.”