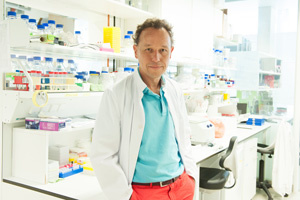 Munich (Germany), December 14th, 2016. Little is known about the role of the brain‘s immune system in Alzheimer's disease. Researchers at the Munich site of the German Center for Neurodegenerative Diseases (DZNE) and the hospital of the Ludwig Maximilian University (LMU) Munich have now found an early immune response in individuals with a genetic predisposition to Alzheimer‘s: their brain’s showed abnormal immune reactions as early as about seven years before the expected onset of dementia. These results demonstrate that in cases of Alzheimer‘s, inflammatory processes in the brain evolve dynamically and are precursors of dementia. These immune responses can be detected by means of a protein in the cerebrospinal fluid, offering physicians the possibility to trace the progression of the disease. The study results are published in the journal “Science Translational Medicine”.

Part of the DIAN project

127 individuals with a genetic predisposition to Alzheimer’s participated in the study. They were on average 40 years old. The vast majority showed no symptoms of dementia or had only minor cognitive impairments. The study was conducted as part of the so-called DIAN project (Dominantly Inherited Alzheimer Network), a worldwide network for research into the inherited form of Alzheimer’s disease.

According to Ewers, “There are many similarities between the inherited form of Alzheimer’s disease and the so-called sporadic variant, which is far more common. TREM2 levels could therefore be a biomarker used to track immune activity while Alzheimer’s is progressing, irrespective of whether the disease is genetic or not. TREM2 may also serve as a therapeutic marker to monitor drug response. We will look into these aspects in the future.”