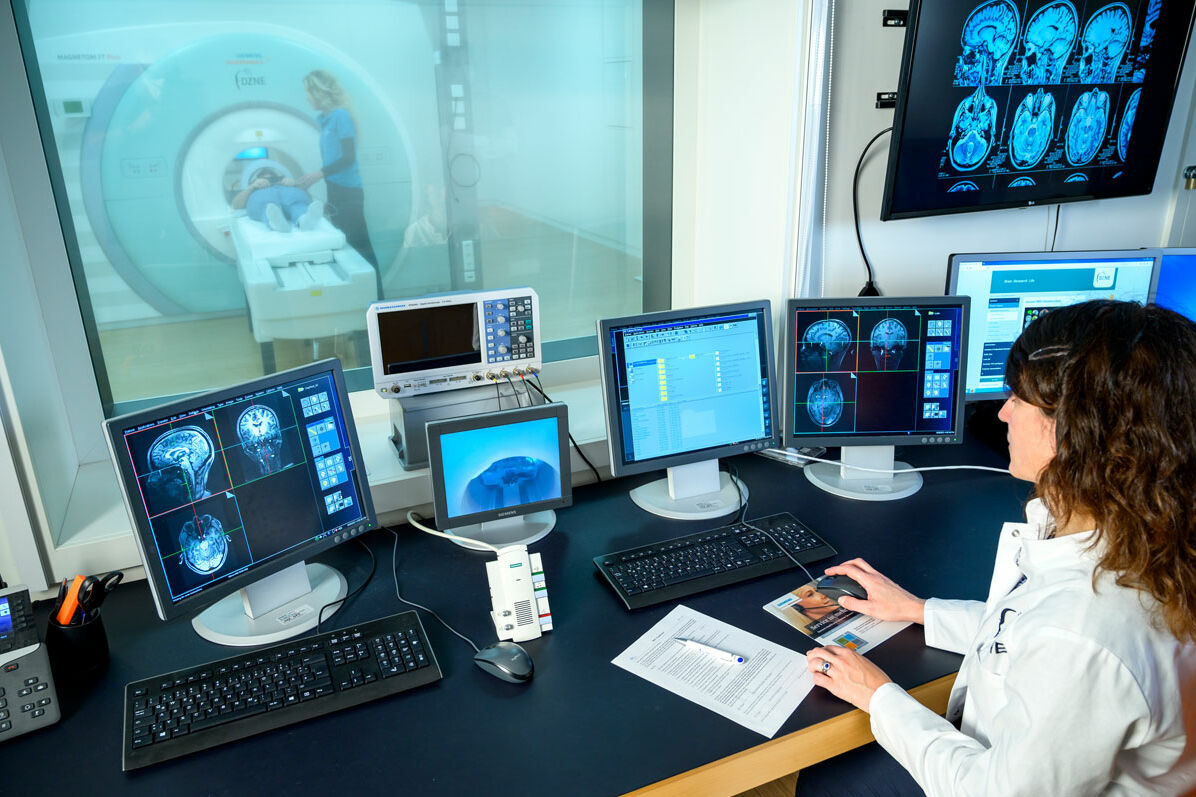 Boosting the Brain’s Defenses Could Help Combat the Disease

Munich/Germany, March 17, 2022. In individuals with a genetic predisposition to Alzheimer’s disease, the immune cells of the brain – the “microglia” – start exerting a protective effect up to two decades before the first symptoms appear. A team from Deutsches Zentrum für Neurodegenerative Erkrankungen (DZNE) and Ludwig-Maximilians-Universität (LMU) München draws this conclusion based on a study of more than 200 volunteers, which they report in the journal “The Lancet Neurology”. In light of their study data, the scientists consider modulating the activity of microglia to be a promising therapeutic approach. To this end, they aim to develop drugs that target a cellular receptor called TREM2.

For the current research, the team led by molecular biologist Prof. Christian Haass and neurologist Dr. Estrella Morenas-Rodríguez analyzed how signatures of microglial activation were related to the development of certain biomarkers of Alzheimer’s disease. To this end, cerebrospinal fluid and cognition were assessed over a period of several years in 248 participants of the DIAN study comprising the different stages of Alzheimer’s disease. The volunteers were also examined by magnetic resonance imaging (MRI) and positron emission tomography (PET) to visualize brain shrinkage and amyloid pathology – both are hallmarks of Alzheimer’s disease.

The starting point for the research team was a protein called TREM2. “This is a receptor on the surface of microglia, but parts of it can detach and are then detectable in the cerebrospinal fluid. It is known from laboratory studies, particularly in mice but also from our earlier human studies, that levels of TREM2 in the cerebrospinal fluid are a good indicator of microglial activity. TREM2 is a kind of activity switch. As TREM2 levels increase, so do microglial protective activities,” explains Christian Haass, research group leader at DZNE and professor of biochemistry at LMU München. “For a long time, it was assumed that microglia mainly cause damage in the course of Alzheimer’s disease, as they can fuel chronic inflammatory processes. However, there is growing evidence from my laboratory and many others that microglia have a protective effect at least at the beginning of the disease. This hypothesis is supported by our current data.”

Estrella Morenas-Rodríguez, postdoctoral researcher in the Haass team at the time of the investigation and now junior group leader at Hospital Universitario 12 de Octubre in Madrid, Spain adds: “One of the determinant points which allowed us to make our observations, and that was also a challenge, was to be able to study for the first time the increase of the TREM2 marker longitudinally. That is, we measured the marker in several samples taken from the same individuals every one or two years. With that we could better capture the development of the different processes occurring in Alzheimer´s disease than studying samples at just one time point.”

People with a genetic predisposition to Alzheimer’s usually develop the disease at a similar age as their relatives with the same mutation who already experience symptoms of dementia. Based on this experience, the researchers were able to estimate the time until the onset of symptoms for all study participants individually. In doing so, they came across early signs of the disease. “We found that TREM2 levels in the cerebrospinal fluid rise as early as 21 years before the estimated onset of the disease,” Haass says. “We also observed that the faster TREM2 increases over the years, the slower pathological events progress in the brain that are typical of Alzheimer’s. We can infer this from biomarkers for so-called amyloid proteins and tau proteins.”

The brain examinations using MRI and PET pointed in a similar direction: In study participants in whom TREM2 levels rose rapidly, deposits of amyloid proteins that are characteristic of Alzheimer’s developed more slowly and brain volume declined more slowly. “Besides the relationship with a slower pathological process, one of our most important and promising findings was to see how strikingly the faster TREM2 increase correlated with a slower cognitive decline in an early stage of Alzheimer´s disease. This has important implications for treatment,” Morenas-Rodríguez notes.

“We see our findings as evidence that TREM2-mediated microglial activity has a protective effect,” Haass says. “In our view, microglia become active as soon as the first amyloid proteins are deposited in the brain, a process, which we call seeding. In other words, at a very early stage of Alzheimer’s and that is what we and our colleagues at the DZNE-Tübingen also observe in animal models.”

For some time now, Haass and his team have been researching drugs that specifically reinforce the protective effect of microglia. Their target is the TREM2 receptor anchored on the cell surface. “We are still in the laboratory phase. However, the current results in humans show that modulating TREM2 is a promising strategy to develop new options against Alzheimer’s. Although in this particular case we studied the genetic form of the disease, we consider that our findings also apply to the so-called sporadic variant of the disease, which is far more common. Certainly, it is crucial that treatment starts as early as possible. Today’s therapies all come far too late to be really effective,” says Haass.

About DZNE: The DZNE is a research center that addresses all aspects of neurodegenerative diseases (such as Alzheimer’s, Parkinson’s and Amyotrophic lateral sclerosis) in order to develop novel approaches of prevention, treatment, and health care. It is comprised of ten sites across Germany and cooperates closely with universities, university hospitals, and other research institutions on a national and international level. The DZNE is publicly funded and a member of the Helmholtz Association of German Research Centers.

Soluble TREM2 in CSF and its association with other biomarkers and cognition in autosomal-dominant Alzheimer’s disease: a longitudinal observational study
Estrella Morenas-Rodríguez et al.
The Lancet Neurology (2022).
DOI: https://doi.org/10.1016/S1474-4422(22)00027-8

Comment, The Lancet Neurology (2022): Dynamics of neuroinflammation in Alzheimer's disease

Highly Responsive Immune Cells Seem to be Beneficial for the Brain, DZNE (2022)