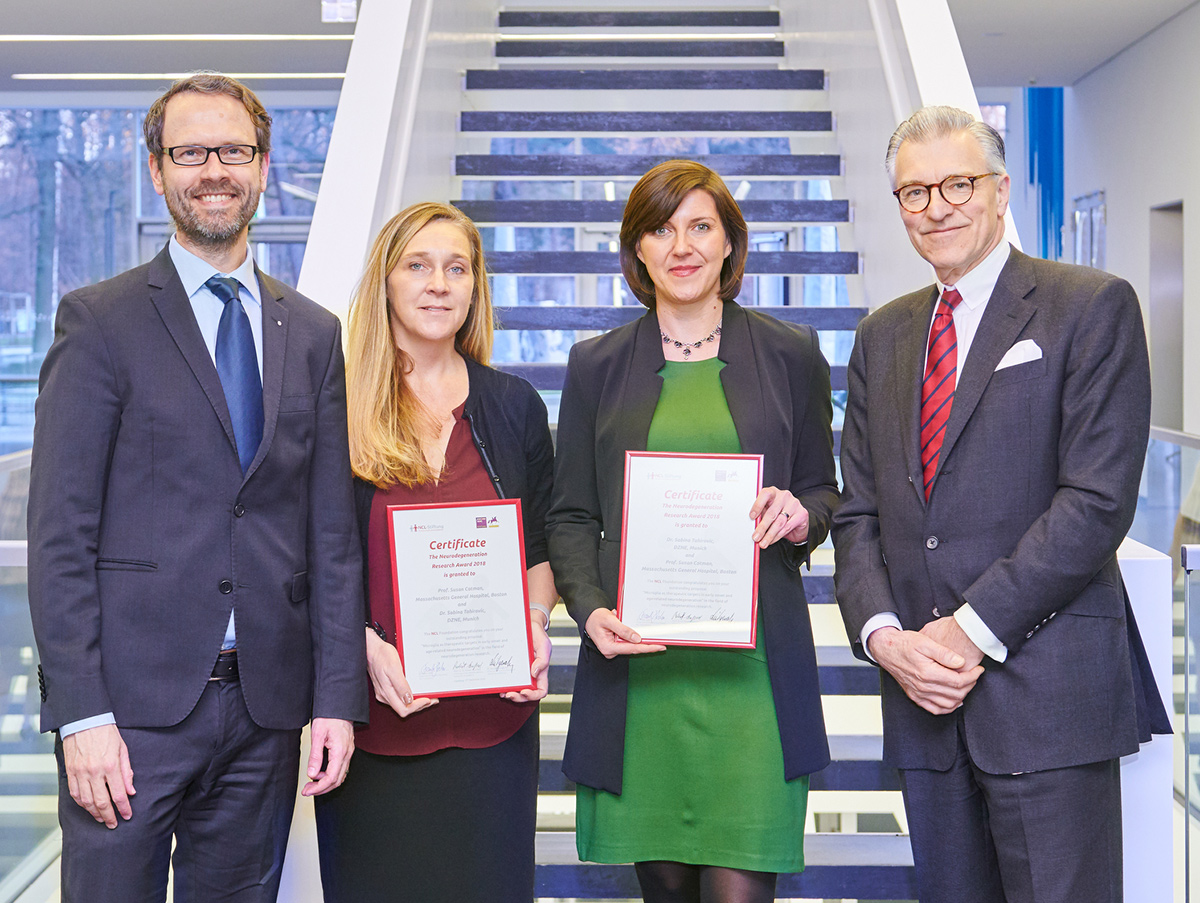 Bonn (Germany), February 26th, 2019. The “Neurodegeneration Research Award”, endowed with 100,000 euros, goes to two neuroscientists in Munich and Boston. Sabina Tahirovic from the German Center for Neurodegenerative Diseases (DZNE) and Susan Cotman from the Massachusetts General Hospital will be using the prize money to research common mechanisms of dementia in children and adults. The two-year project focuses on the brain’s immune cells. The NCL Foundation, with the support of the Joachim Herz Foundation, established this research promotion prize, which is awarded for the first time. The award ceremony took place in the run-up to the “Rare Disease Day”, which is celebrated worldwide on February 28.

“Dementia is usually associated with Alzheimer’s and elderly people. However, there are a large number of dementias that manifest in children and adolescents,” says Dr. Frank Stehr, Chairman of the NCL Foundation. “These diseases are rare and therefore still relatively unexplored. But they are all deadly. Most patients do not reach the age of 30.”

Childhood dementias include “Niemann-Pick type C disease” (NPC) and “neuronal ceroid lipofuscinosis” (NCL), of which various variants are known. These diseases are not only associated with cognitive decline, as potential symptoms also include epileptic seizures, movement disorders and vision loss. NPC and NCL are triggered by gene mutations. As a result, hardly degradable substances accumulate in the neurons and other cells of the brain. The neurons ultimately perish from this burden.

“Despite all differences, these diseases share a number of features with Alzheimer’s,” explains Dr. Tahirovic. “This includes the activation of the immune cells of the brain, the so-called microglia. As a result, a chronic inflammation develops. The brain is then virtually under constant fire.”

Tahirovic and her US colleague will be investigating these processes. Dr. Alessio Colombo, a coworker of Tahirovic’s lab, will be supported by the prize money and given the opportunity for research visits at the Massachusetts General Hospital in Boston.

“We aim to understand how the microglia change as a result of NCL and NPC and why they shift into a state of permanent activation,” says Dr. Tahirovic. “On this basis, our goal is to find new targets for therapy of childhood dementias that may also be explored for the treatment of Alzheimer’s.”