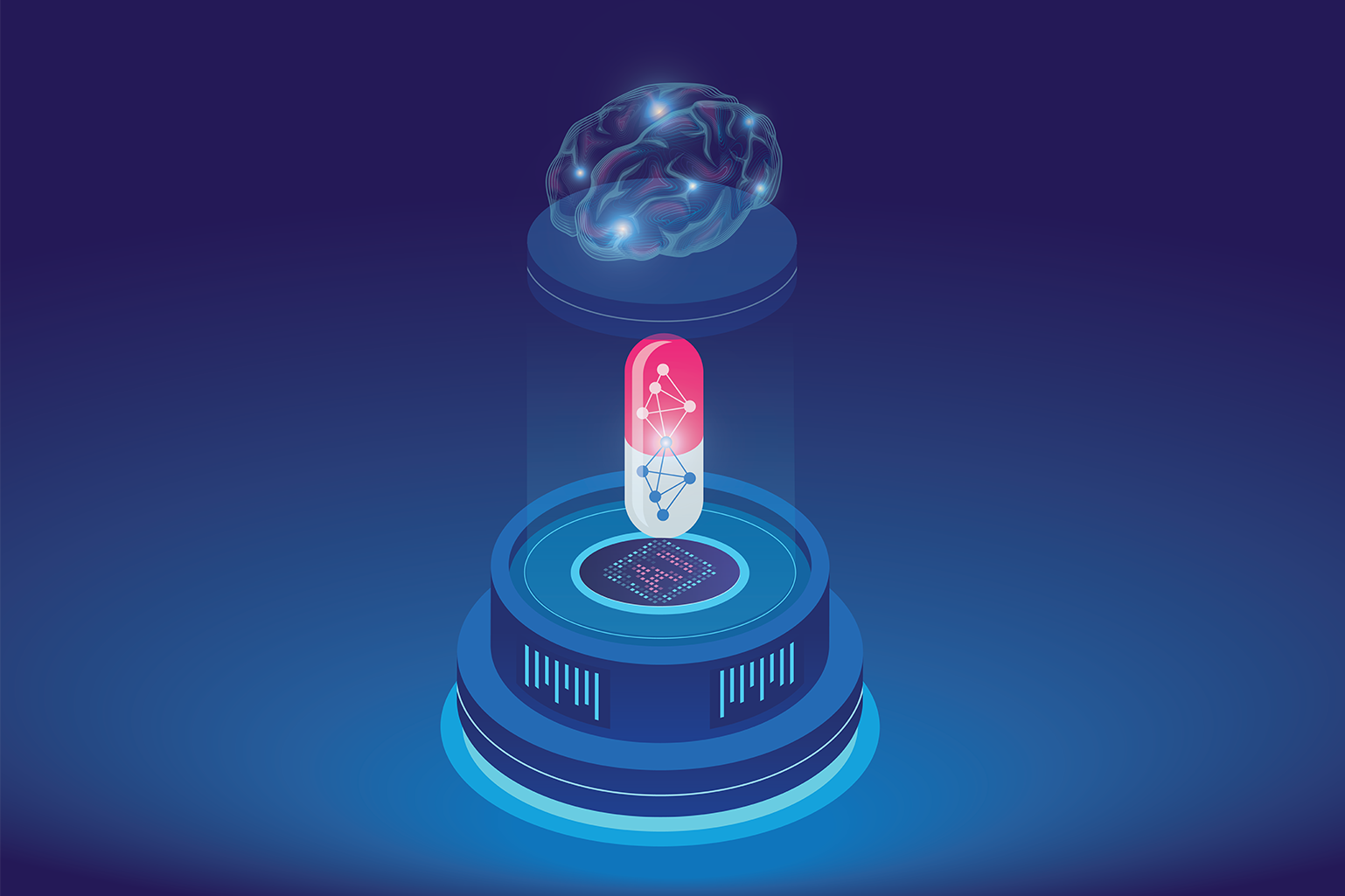 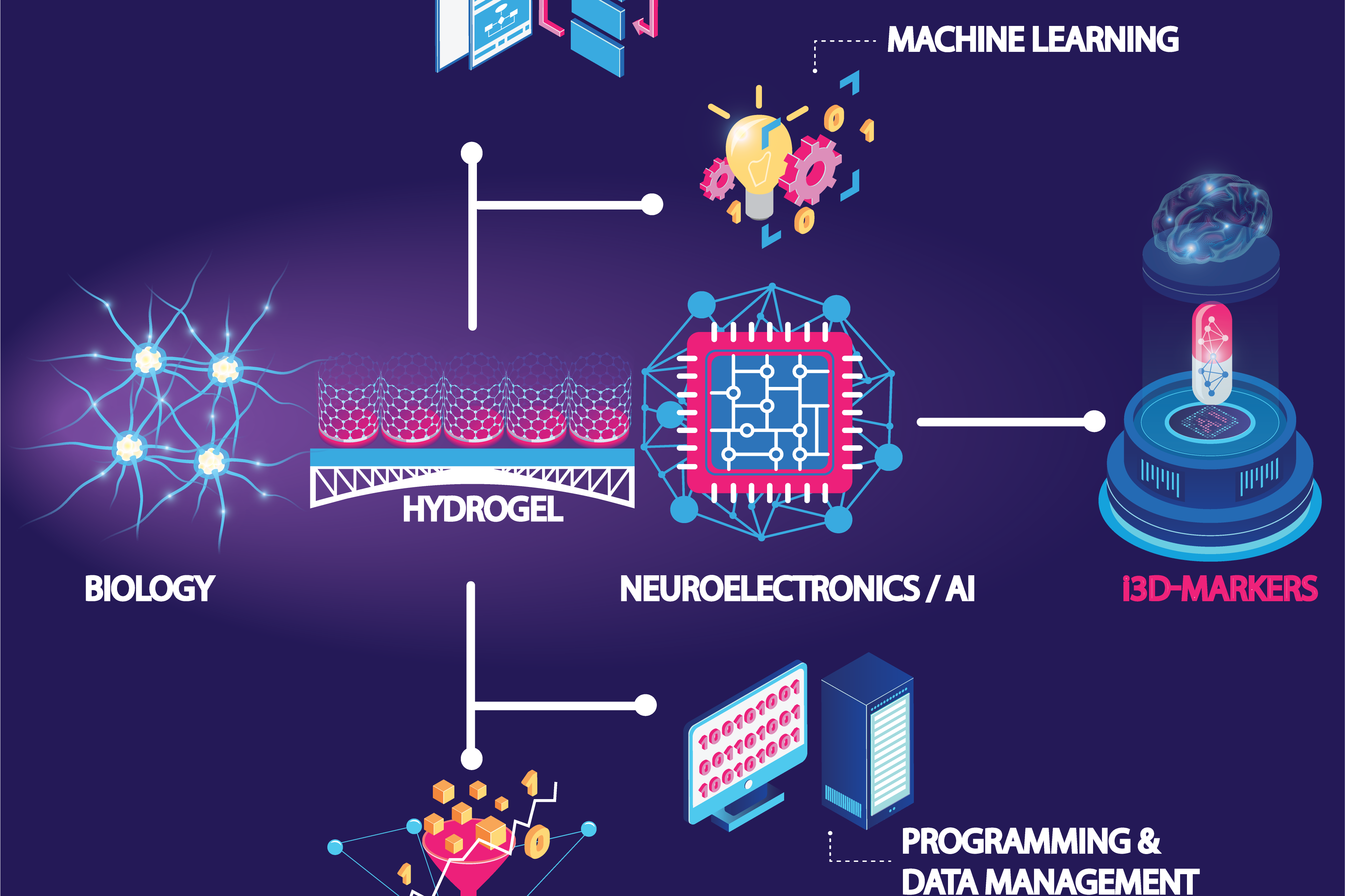 Synopsis of the technology of “3D-Markers” and its components. Source: DZNE / Amin Lab

Dresden (Germany), June 23, 2021. Dr. Hayder Amin and Dr. Caghan Kizil from the DZNE’s Dresden site aim to speed up developing drugs against brain diseases through cutting-edge technology. To this end, they are generating an innovative technology platform, termed “i3D-Markers”, based on high-density microelectrode arrays and 3-dimensional networks of human neurons. Compounds to be tested will be dripped onto this setup, and artificial intelligence will be used to determine the reaction of the neurons. With this platform, the DZNE scientists intend to optimize the selection of robust drug candidates for clinical trials and help avoid dead-ends in the development pipeline. Validation of this approach is supported with 820,000 euros from the “Helmholtz Validation Fund”. Additional financing is provided by the DZNE, which brings the total budget to about 1.2 million euros. The researchers’ goal is to commercialize this new technology and get it ready for industry-scale operations.

Drug development is costly and marked by setbacks. “In recent years, most new drugs against brain diseases have failed in human studies. One reason for this is the inefficient in vitro assays for neurological diseases – especially in the early phase of drug development before clinical trials begin”, said Dr. Caghan Kizil, a neuroscientist who focuses on generating experimental models and novel understandings of Alzheimer’s disease. His Dresden colleague, Dr. Hayder Amin, remarked: “The existing methodology is a fundamental shortfall. The human brain is tremendously complex and cannot be modeled adequately by the current methodologies used in the laboratory. They are too reductionist to reveal the true effect of a drug on neuronal networks. In particular, two-dimensional cell cultures and conventional data acquisition methods do not capture the complicated electrophysiological and cellular properties of the brain.” Amin, who has vast expertise in multiscale experimental neuroscience, neurotechnology, and developing computational tools to investigate neural dynamics, added: “This generates a critical need for tools that better support the development of new pharmaceuticals.”

A Fusion of Technologies

The Dresden researchers have innovative ideas to tackle this problem. “i3D-Markers”, their novel technology platform, could answer a critical question in drug development: “How would a particular candidate drug affect the human brain networks: good or bad?”. Experience shows that this question is difficult to answer before clinical trials in humans. “In fact, many drug candidates that show medical potential in the laboratory or animal studies fail in clinical trials due to unwanted effects on human brains,” Amin said. The DZNE scientists are optimistic that i3D-Markers can make a difference. “Our goal is to validate that our technology can predict, better than current methodologies, whether an experimental compound will have the intended effect on humans. Hopefully, this will help to accelerate the path to new medicines, avoid dead ends in drug development and reduce development costs,” Kizil said.

The concept of the Dresden researchers fuses neuroelectronics with an innovative cell culture method. “i3D-Markers utilizes neuronal cultures interfaced with a micro-chip. We grow neurons on high-density microelectrode-based chips to form a neuronal 3D configuration as in the brain. This setup enables us to track the electrical activity from  thousands of neurons simultaneously with high spatiotemporal resolution,” Amin explained. “This large array of tiny little sensors gives us insights into the dynamics of this very complex human neuronal network. We will obtain high-content data in unprecedented detail and single-cell resolution.”

A drug to be tested will be dripped onto the neurons at a specified concentration. “Then you start recording electrophysiological data, which will be collected by our array of sensors,” Kizil said.

Although the network will comprise more than a hundred thousand neurons, this cell culture, including the micro-chip, would fit an area 10 times smaller than a 2-eurocent coin. However, the neuronal activity information will be complex since it is rendered by thousands of micro-contact sensors. Thus, for analysis, the scientists will use artificial intelligence methods. Such algorithms identify and extract patterns from complex multidimensional data. “By using artificial intelligence and special mathematical approaches, we want to develop so-called functional biomarkers based on the neuronal network activity. These biomarkers will tell us whether the network is doing well or not and if a given drug influences this condition, which will help us to identify promising compounds”, Amin said.

Aiming for a Start-up

The DZNE scientists do not start from scratch: They have a proof-of-concept from previous studies, which shows that the various technologies included in this project can indeed be successfully merged. On this basis, the validation process, which is now getting underway, aims to develop a technological platform that can eventually be commercialized. A board of scientific advisors will be involved in this endeavor, as well as several post-graduate students. Furthermore, industry partners from the fields of microtechnology and drug manufacturing will provide in-kind support. “We aim to build a fully functional prototype and test it within the next two years,” Amin said. “When the technology is ready for routine application, we would first provide in-house service to external customers. These could be research institutions and pharmaceutical companies. In the long term, we aim to establish a start-up company.”

The DZNE is a research center that addresses all aspects of neurodegenerative diseases (such as Alzheimer’s, Parkinson’s and Amyotrophic lateral sclerosis) in order to develop novel approaches of prevention, treatment, and health care. It is comprised of ten sites across Germany and cooperates closely with universities, university hospitals, and other research institutions on a national and international level. The DZNE is publicly funded and a member of the Helmholtz Association of German Research Centers.