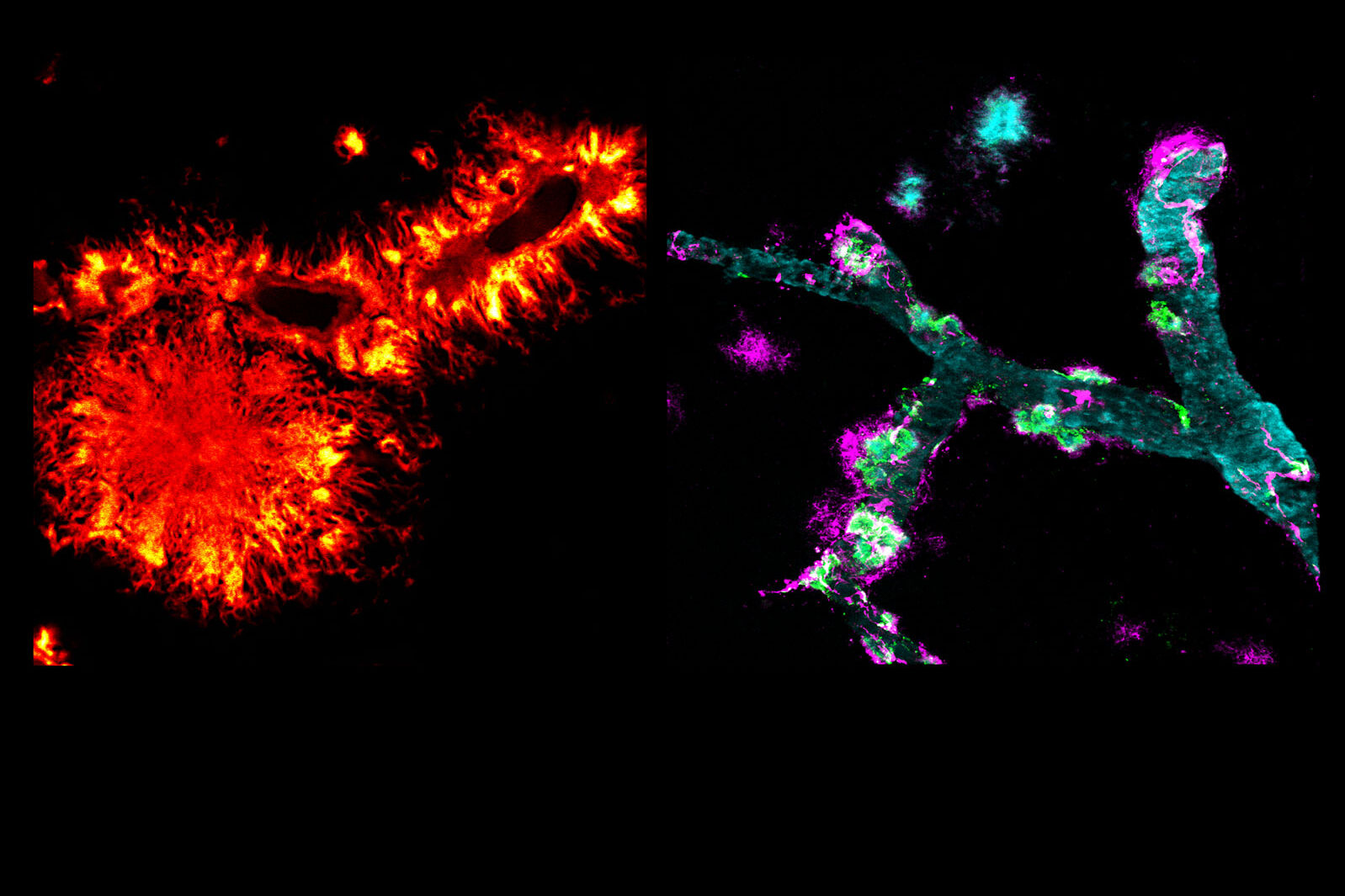 What appears to be art are images of blood vessels: The red-yellow image shows an amyloid plaque resembling a flower in the lower left. Above and to the upper right are cross-sections of blood vessels with flame-like amyloid fibrils. In the second image, a blood vessel can be seen in bluish color containing amyloid beta and medin deposits - color-coded in purple and green. The images have been colored afterwards. Source: DZNE / Neher Lab

Bonn, November, 17th , 2022. The protein medin is deposited in the blood vessels of the brains of Alzheimer's patients along with the protein amyloid-β. Researchers from DZNE have discovered this so-called co-aggregation. They have now published their observation in the renowned journal Nature. "Medin has been known for over 20 years, but its influence on diseases was previously underestimated. We were able to show that pathological changes in the blood vessels of Alzheimer's patients are significantly enhanced by medin," says Dr. Jonas Neher from the Tübingen site of DZNE, who led the study. The Hertie Institute for Clinical Brain Research in Tübingen, the University of Tübingen and several international institutions and cooperation partners were also involved in this long-term project.

Medin belongs to the group of amyloids. Of these proteins, amyloid-β is best known because it clumps together in the brains of Alzheimer's patients. These aggregates then deposit both as so-called plaques directly in the brain tissue, but also in its blood vessels, thereby damaging the nerve cells and the blood vessels, respectively. But while many studies have focused on amyloid-β, medin has not been a focus of interest. "There was little evidence of pathology, that is, of a clinically striking finding associated with medin - and that is often the prerequisite for a more in-depth study of an amyloid," Jonas Neher explains.

However, medin is actually found in the blood vessels of almost everybody over 50 years of age, making it the most common amyloid known. With his team, Jonas Neher originally found that medin even develops in aging mice, and reported this discovery two years ago in the scientific journal PNAS (DOI: 10.1073/pnas.2011133117). The older the mice get, the more medin accumulates in the blood vessels of their brains, was the finding at the time. What's more, when the brain becomes active and triggers an increase in blood supply, vessels with medin deposits expand more slowly than those without medin. This ability of blood vessels to expand, however, is important to optimally supply the brain with oxygen and nutrients.

For their latest results, the researchers built on this foundation and looked specifically at Alzheimer's disease. First, they were able to show in Alzheimer's mouse models that medin accumulates even more strongly in the brain’s blood vessels if amyloid-β deposits are also present. Importantly, these findings were confirmed when brain tissue from organ donors with Alzheimer's dementia was analysed. However, when mice were genetically modified to prevent medin formation, significantly fewer amyloid-β deposits developed, and as a result, less damage to blood vessels occurred.

"There are only a handful of research groups worldwide working on medin at all," says Jonas Neher. Most recently, a study from the U.S. reported that medin levels may increase in Alzheimer's patients. However, it remained unclear whether this increase is merely a consequence of the disease or whether it is one of the causes. "We have now been able to show through many experiments that medin actually promotes vascular pathology in Alzheimer's models," Neher said. So medin deposits are indeed a cause of blood vessel damage. "And this indicates that medin is one of the causes of the disease," Neher said.

In their studies, the researchers stained tissue sections from both mice and Alzheimer's patients in such a way that specific proteins become visible. This allowed them to show that medin and amyloid-β are deposited together in blood vessels of the brain – co-localization is the technical term for this. In a next step, they were able to prove that these two amyloids also co-aggregate - that is, form mixed deposits. "Amazingly, medin interacts directly with amyloid-β and promotes its aggregation – this was completely unknown," Jonas Neher summarizes the results.

It is precisely from this insight that the researchers draw hope for the development of a new treatment. "Medin could be a therapeutic target to prevent vascular damage and cognitive decline resulting from amyloid accumulation in the blood vessels of the brain," they conclude. It is undisputed among experts that in addition to amyloid-β aggregates in brain tissue, the development of Alzheimer’s disease is also promoted by vascular alterations – that is, reduced function or damage to blood vessels. Therefore, treatments that target not only plaques but also affected blood vessels could help patients.

In a next step, it will now be necessary to determine if medin aggregates can be removed therapeutically and whether this intervention actually has an effect on cognitive performance. The scientists first want to test this in mouse models, because these reflect the pathological changes in Alzheimer's patients very well.