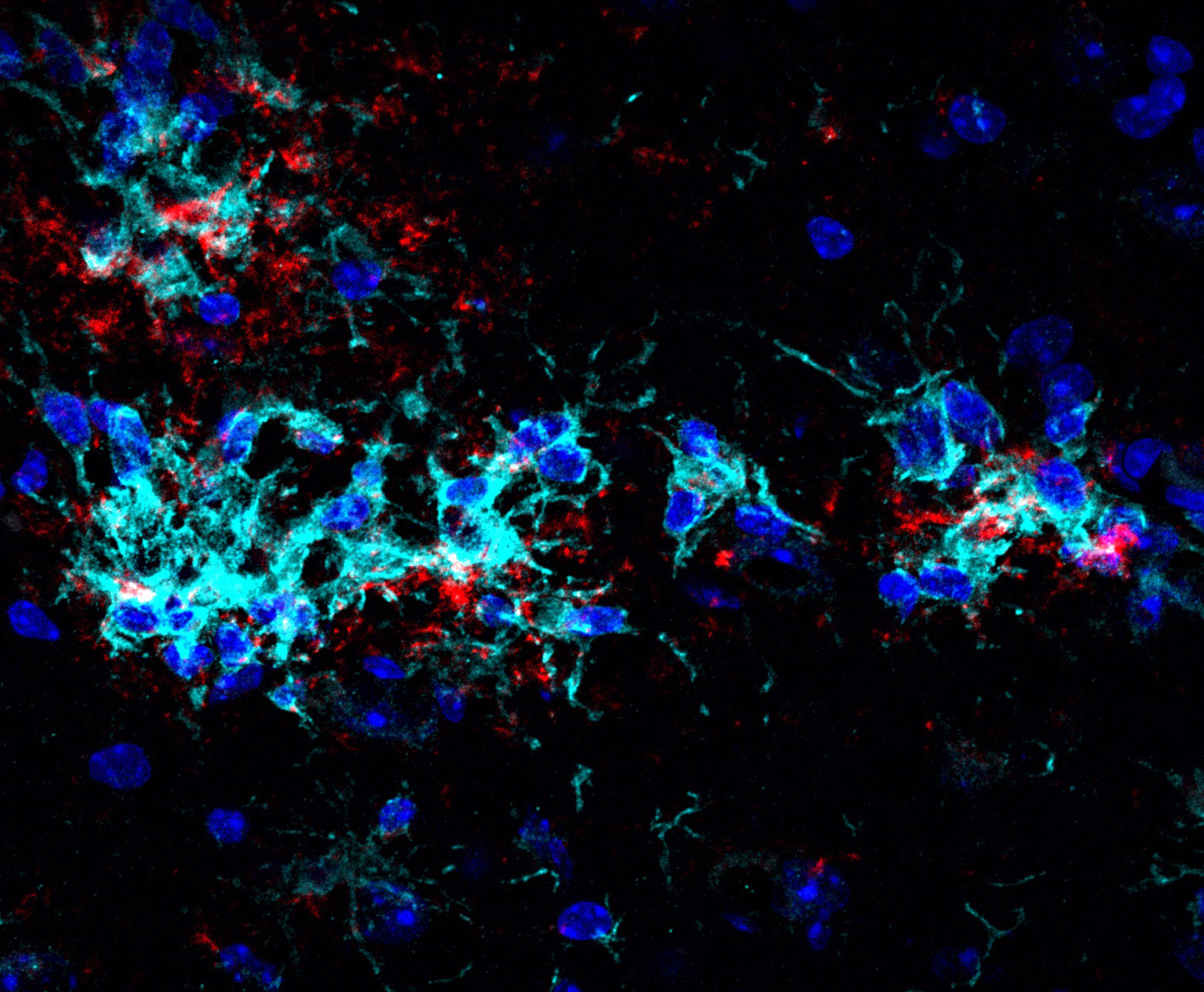 German researchers have developed a novel, experimental approach against Alzheimer’s. For this they collaborated with a US company. The approach is based on the stimulation of immune cells of the brain (microglia) by means of an antibody. This image shows microglia (cyan) stimulated in this way, which gather around deposits of proteins - called “plaques” (red) - and break them down. The nuclei of microglia and neurons appear dark blue. Source: DZNE / LMU München / Haass Lab

Munich/Germany, March 10, 2020. Scientists at the German Center for Neurodegenerative Diseases (DZNE), the Ludwig-Maximilians-Universität (LMU) Munich and Denali Therapeutics (South San Francisco, CA, USA)have developed an approach to stimulate immune cells of the brain in such a way that they might possibly provide better protection against Alzheimer’s disease. Their report has been published in the journal “EMBO Molecular Medicine”. These findings could ultimately enable development of novel therapies to treat Alzheimer’s disease.

The researchers identified a specific antibody that binds to the brain’s immune cells, termed “microglia”. This stimulates their activity in such a way that they live longer, divide more quickly and detect aberrant substances more easily. In mice with disease symptoms resembling those of Alzheimer’s, studies revealed that deposits of proteins (called “plaques”) were recognized and degraded more quickly. The notorious plaques are among the hallmarks of Alzheimer’s disease, and are suspected to cause neuronal damage.

“We found that the plaques were not removed in their entirety, but rather this happened to their periphery. It is assumed that it is precisely this border area that repeatedly releases proteins which cause damage to neurons. So we may have found a way to specifically remove particularly harmful forms of amyloid, which is the protein contained in the plaques,” said Prof. Christian Haass, speaker of the DZNE’s Munich site and a department head of the LMU’s Biomedical Center Munich.

Immune cells of the brain

Haass and colleagues have been focusing on the immune cells of the brain for quite some time. Their research focuses on TREM2, a so-called receptor on the cell surface to which other molecules can attach. TREM2 can occur in different versions from person to person - some of these altered versions drastically increase the risk of developing Alzheimer’s in old age. In previous studies, the Munich researchers found that these special variants put the microglia into an irreversible dormant state, which prevents the immune cells from functioning properly to recognize, absorb and break down plaques and dead cells. “Conversely, we suspect that activation of the microglia could help to eliminate plaques and thus combat Alzheimer’s. TREM2 seems to play an important role in this process. The receptor apparently helps to switch the microglia from dormant to active mode,” the Munich scientist said.

This is precisely the approach the Munich team and Denali are pursuing. The antibody identified, which is now generated using biotechnological methods, binds to TREM2, thereby triggering processes that enhance microglia activity.

However, the Munich-based biochemist cautioned that further studies are required prior to progressing this approach to clinical trials: “We have shown that immune cells can be stimulated to break down amyloid deposits more effectively. This demonstrates that our approach can work in principle. However, there is still a long way to go before it can be tested in humans and additional data is necessary to validate this approach.”

Current therapies can alleviate the symptoms of Alzheimer’s to some extent, but they cannot stop the disease from progressing. “So far, all attempts to treat Alzheimer’s effectively have been unsuccessful. Just recently, a clinical trial with two drugs failed. Although there is another experimental agent that seems to have a positive effect on memory, it remains to be seen whether this drug will be approved by regulatory authorities. In view of this situation, innovative therapeutic approaches are urgently needed. This is precisely the aim of our research”, said Haass.