DZNE Scientist Gets Most Important Research Award in Germany 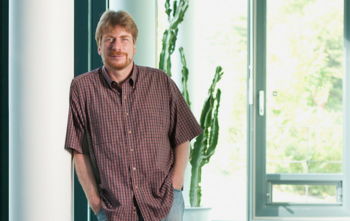 Bonn, Germany, December 10th, 2015. The molecular biologist Frank Bradke (46), group leader at the German Center for Neurodegenerative Diseases (DZNE) and professor for neurobiology at the University of Bonn, will be awarded the “Gottfried Wilhelm Leibniz Prize”, which is endowed with 2.5 million euros. The Deutsche Forschungsgemeinschaft (DFG) thereby honors his research on the growth and regeneration of neurons. Through his research Bradke aims to lay the basis for novel therapies, especially for the treatment of spinal cord injuries. „I am overwhelmed and really excited. This is a tremendous recognition for my work“, says the molecular biologist. The award ceremony will be held in Berlin on March 1, 2016.

“We are very proud that Frank Bradke has received this prestigious award”, says Prof. Pierluigi Nicotera, Scientific Director and Chairman of the Executive Board of the DZNE. „Frank Bradke, who is an internationally top-ranked scientist, has very well deserved this prize. His research is based on a full translational approach, therefore opening up new prospects for therapies of neurodegenerative diseases. His personality and his impact on research are extremely important for the DZNE.“

Nerve cells are wire-like conductors that transmit and receive signals in the form of electrical impulses. This function can be impaired by accidents or disease. Whether or not the affected nerves can recover largely depends on their location: for instance nerve cells in the limbs, the torso and the nose can regenerate to some degree and regain some or all of their function.

In contrast, the neurons in the brain and spinal cord do not have this ability. If they are damaged by accident or disease, the patient is likely to suffer long-term paralysis or other disabilities. But why is regeneration of these neurons and their long nerve fibers, the axons, impeded? This question is the focus of Bradke’s research.

„Chemicals that block the growth are released by the scar tissue that is formed due to injuries”, says the molecular biologist. “The ideal treatment for promoting axon regeneration after spinal cord injury would inhibit the formation of scar tissue and activate the axons’ regenerative potential”.

In laboratory studies Bradke and his team were able to show that certain cancer drugs can promote the regeneration of nerve cells, while reducing scarring. A corresponding treatment of rats with spinal cord injury significantly improved the animals’ mobility.

“It is certainly still a long way before we may start treating patients. However, we understand better and better what impedes the regeneration of nerve cells. This opens up the possibility of a targeted search for drugs that could perhaps one day be used in clinical practice”, says Bradke. “The Leibniz Prize is a confirmation that we are on the right track. This award will open up entirely new ways for our team to continue our research.”

After studying at the Freie Universität Berlin and University College London, Bradke initially carried out research at the European Molecular Biology Laboratory (EMBL) in Heidelberg as part of his doctoral thesis. As a postdoctoral researcher, he moved to the University of California in San Francisco and Stanford University in 2000. In 2003, he was appointed a group leader at the Max Planck Institute of Neurobiology in Martinsried. In 2011, he was awarded the IRP Schellenberg Prize, one of the highest awards in the field of regeneration research. In the same year he became full professor at the University of Bonn, and was appointed head of the Axon Growth and Regeneration working group at the DZNE.

In 2013, Frank Bradke was elected a member of the European Molecular Biology Organization (EMBO), members of which are the world's most renowned molecular biologists. In 2014 he was elected into the Leopoldina, the German National Academy of Sciences.