DZNE researcher elected into the Leopoldina 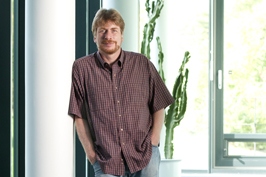 Bonn, October, 9th, 2014. Professor Frank Bradke (44), head of the "Axon Growth and Regeneration" research group at the German Center for Neurodegenerative Diseases (DZNE) in Bonn, has been elected as a member of the Leopoldina, the German National Academy of Sciences. Founded in 1652, the Leopoldina in Halle is one of the world's oldest science academies. It has been representing Germany as its national academy since 2008

The Bonn-based molecular biologist Frank Bradke has been selected to be a distinguished member of the Leopoldina's neuroscience department. His investigations focus on the growth and regeneration of nerve cells and nerve fibers (axons) with the goal to induce nerve regeneration in the spinal cord and brain, e.g. after a spinal cord injury. His research is internationally renowned and its potential impact on new emerging treatments clearly supports DZNE's mission to develop new prevention, treatment and care strategies in the field of neurodegenerative diseases.

After studying at the Freie Universität Berlin and University College London, Bradke initially carried out research at the European Molecular Biology Laboratory (EMBL) in Heidelberg as part of his thesis. As a postdoctoral researcher, he moved to the University of California in San Francisco and Stanford University in 2000. In 2003, he was appointed a group leader at the Max Planck Institute of Neurobiology in Martinsried. In 2011, he was awarded the IRP Schellenberg Prize, one of the highest awards in the field of regeneration research. In the same year he became full professor at the University of Bonn, and was appointed head of the Axon Growth and Regeneration working group at the DZNE. In 2013, Frank Bradke was elected a member of the European Molecular Biology Organization (EMBO), members of which are the world's most renowned molecular biologists.

The Leopoldina deals with various future issues as part of its social and political consulting activities - including climate, energy, demographics, medicine, and society. The expert groups develop policy recommendations and statements on these topics. All members are appointed on the basis of their scientific excellence.