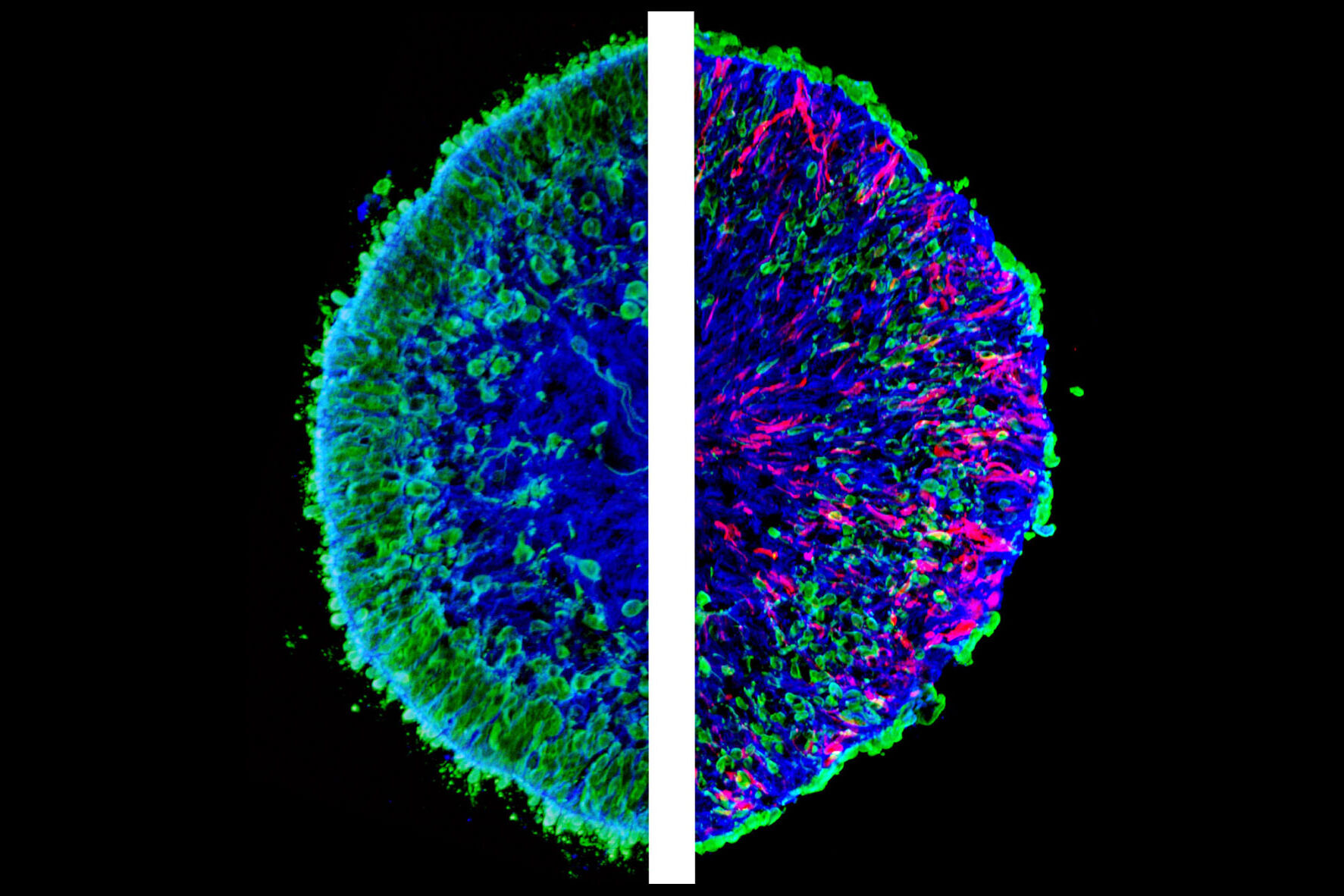 Microscopic images of lab-grown mini-retinas, so called human retina organoids. The left image shows a section of a healthy (control) organoid, whereas the right image shows an organoid section with pathological changes. On the right, there is a massive loss of photoreceptor neurons that are labeled in green. The red color shows the pathological Müller glia cells that are not present in the healthy control. Source: Völkner et al., Nat. Comm., 2022

Thanks to laboratory produced human mini-retinas, researchers were able to observe complex changes in the retina as they occur in macular degeneration. This enabled them to discover the so-called cell extrusion as a potential mechanism for neurodegenerative diseases.

Bonn, December, 1st, 2022. Visual cells in the human retina may not simply die in some diseases, but are mechanically transported out of the retina beforehand. Scientists from DZNE and the Center for Regenerative Therapies Dresden (CRTD) at TU Dresden have now discovered this. For their research, they used miniature human retinas produced in the laboratory, so-called organoids. In the new issue of the journal Nature Communications, they report on their discovery, which paves the way for completely new research approaches, especially in connection with age-related macular degeneration (AMD).

"This principle, known as cell extrusion, has not yet been studied in neurodegenerative diseases," says Prof. Mike Karl, who heads the research group. AMD is the main cause of blindness and severe visual impairment in Germany. It is estimated that a quarter of people over the age of 60 suffer from AMD. The macula is a special region within the human retina that is needed, among other things, for high resolution colour vision. In AMD, thousands of light-sensitive visual cells, the so-called photoreceptor cells, are lost in the macula.

"This was the starting point for our research project: we observed that photoreceptors are lost, but we could not detect any cell death in the retina," explains Mike Karl, who conducts research at the Dresden site of the DZNE and the CRTD at TU Dresden. "Half of all photoreceptors disappeared from the retinal organoid within ten days, but obviously they did not die in the retina. That made us curious."

For the researchers - the DZNE and the CRTD were involved, as well as the Helmholtz Centre for Environmental Research (UFZ) - an elaborate search for the causes began. This led them to a study from 2012 (doi: 10.1038/nature10999): Jody Rosenblatt from King's College in London was the first to describe the extrusion of living cells - the mechanical ejection of cells from ephitelia. The thereby extruded cells then only die in succession. She demonstrated this mechanism in simple epithelial cells of the kidney. Mike Karl and his team now showed in their pioneering work that this extrusion can also be triggered in the much more complex retina, consisting of several different cell types, and leads to neurodegeneration. Interestingly, this cell extrusion could explain the outlying cells that have been previously reported in the ageing and diseased retina of patients with AMD and other diseases, but have not been studied in detail until now.

The researchers made use of a technique they had previously developed: They worked with so-called retinal organoids - an organ-like, three-dimensional model of the human retina grown from human stem cells in the laboratory. These organoids provide some characteristics of the human macula. The team found that two substances previously described in various neurodegenerative diseases -- the proteins HBEGF and TNF -- are sufficient to trigger degeneration in the retinal organoid.

During this process, the researchers filmed the organoids in real time by so-called live imaging, considered as the gold standard for cell tracking. "We were able to capture the degeneration of photoreceptors through cell extrusion in the lab," says Mike Karl. The scientists found that this extrusion is triggered by activation of the protein PIEZO1, a sensor for biomechanical forces.

That biomechanics may play a larger role in retinal degeneration is a new finding. "The retina is not known to be a biomechanically active tissue such as a muscle. It was known that diseases of the nervous system are associated with changes in the shape of cells, but to which extent biomechanical regulators are involved has not yet been studied in detail," says Karl. Thanks to the organoids, he and his team were able to observe the processes in an accelerated manner, so to speak: While it takes several years or even decades for photoreceptors to disappear in patients, such a process could now be reproduced in the laboratory in just 40 days. In the next step, the researchers now want to find out whether this mechanism occurs in human patients in the same way as in organoids. Initial findings suggest that this might be the same mechanism, but proof is still lacking.

In their study, the Dresden researchers also found that pharmacological agents could prevent extrusion in an experimental setting in their model. They used a special snake venom to block the mechanosensor PIEZO1 on the cells. As a result, not only were the photoreceptors not ejected, but further pathological changes in the retina were prevented. "This gives hope for the development of future preventive and therapeutic treatments for complex neurodegenerative diseases such as AMD," Mike Karl sums up.

About the Center for Regenerative Therapies Dresden (CRTD): The Center for Regenerative Therapies Dresden (CRTD) of TU Dresden is an academic home for scientists from more than 30 nations. Their mission is to discover the principles of cell and tissue regeneration and leverage this for the recognition, treatment, and reversal of diseases. The CRTD links the bench to the clinic, scientists to clinicians to pool expertise in stem cells, developmental biology, gene-editing, and regeneration towards innovative therapies for neurodegenerative diseases such as Alzheimer's and Parkinson's disease, hematological diseases such as leukemia, metabolic diseases such as diabetes, bone and retina diseases. The CRTD was founded in 2006 as a research center of the German Research Foundation (DFG) and funded until 2018 as a DFG Research Center, as well as a Cluster of Excellence. Since 2019, the CRTD is funded by the TU Dresden and the Free State of Saxony. The CRTD is one of three institutes of the central scientific facility Center for Molecular and Cellular Bioengineering (CMCB) of the TU Dresden.