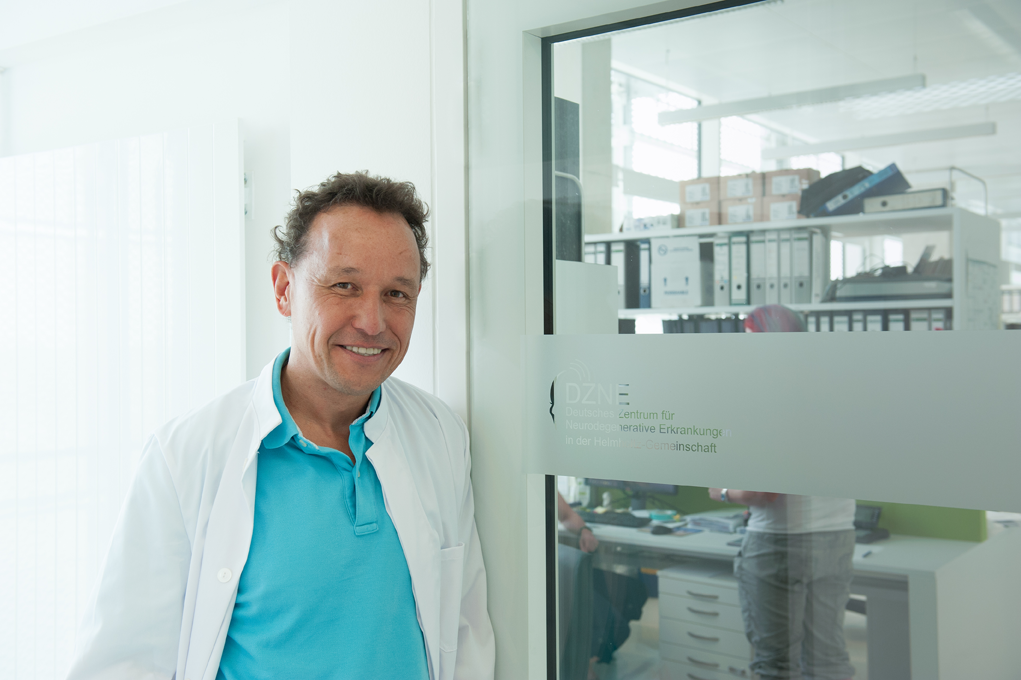 Copenhagen/London/Munich, March 6th 2018. Together with three other neuroscientists Professor Christian Haass, speaker of the German Center for Neurodegenerative Diseases (DZNE) Munich site and Professor at the Ludwig-Maximilians-University of Munich, receives the world’s most valuable prize for brain research. The 2018 Brain Prize, awarded by the Lundbeck Foundation in Denmark, is worth one million Euros. Awarded annually, it recognises international scientists who have distinguished themselves by an outstanding contribution to neuroscience. Besides Haass the 2018 Brain Prize goes to Bart De Strooper (London and Leuven), Michel Goedert (Cambridge) and John Hardy (London) for their groundbreaking research on the genetic and molecular basis of Alzheimer’s disease. The award ceremony will take place on 9 May in Copenhagen.

The chairman of the Lundbeck Foundation Brain Prize selection committee, Professor Anders Bjorklund, said: “Alzheimer´s disease is one of the most devastating diseases of our time and remarkable progress has been made during the last decades. These four outstanding European scientists have been rewarded for their fundamental discoveries unravelling molecular and genetic causes of the disease that have provided a basis for the current attempts to diagnose, treat and possibly even prevent neurodegenerative brain diseases. The award recognizes that there is more to Alzheimer´s disease than amyloid, and that the field of dementia research is more than Alzheimer´s disease alone.”

“The Brain Prize is an ambassador for science and puts a spotlight on great discoveries,” Haass said. “We are facing a time when more and more people don’t believe in science anymore. Science is not always right, but it is the only way to find the truth and for humans to progress.” When Haass started to work on Alzheimer's in 1990, very little was known about the cellular mechanisms involved in this disease. He focused on the generation and metabolism of amyloid, the major component of the disease that signifies plaques.

His research into Alzheimer’s has concentrated on the cascade of events starting with amyloid and progressing through the development of plaques and tangles that eventually kill brain cells and destroy memory. Haass hypothesized that amyloid production may be normal and not necessarily part of a pathological process, which at the time was the widely accepted general opinion in the field. This pivotal finding was highly significant and has since led to the development of therapeutic approaches to lower amyloid production in patients. Working with John Hardy, Professor Haass has demonstrated how amyloid is generated and how genetic mutations seen in families with very aggressive and rare forms of Alzheimer’s affect its production.

Most recently, Professor Haass generated mouse models to investigate inflammation in neurodegenerative disorders, which according to his findings may at least initially play a protective role. He found that genetic mutations alter the function of special immune cells called microglia in the brain that can lead to Alzheimer’s disease. This has stimulated a completely new approach to designing possible new therapies by modulating the activity of microglia.

Around 10 million people in Europe have Alzheimer’s disease. This and other neurodegenerative diseases of the ageing brain cause a great deal of suffering for patients and their families and are a huge challenge for society. It is among the hardest diseases to get a grip on despite dramatic progress over the last decades. The research pioneered by these four European scientists has revolutionised our understanding of the changes in the brain that lead to Alzheimer´s disease and related types of dementias.

Background to the other laureates

Geneticist Professor John Hardy is Chair of Molecular Biology of Neurological Disease at the Institute of Neurology, University College London. After finding mutations in the gene for the protein amyloid in a family with early onset disease he proposed a ground-breaking “amyloid hypothesis” for Alzheimer’s disease suggesting that disease was initiated by the build-up of this protein in the brain. The disease progresses when there is an imbalance in the production and the clearance of amyloid. His discoveries of genetic mutations have had a dramatic impact on understanding not only Alzheimer’s disease but more recently in other neurodegenerative diseases including Parkinson’s. For his work, Hardy already received the Hartwig Piepenbrock-DZNE Prize in 2015. “Collaborating with clinicians, geneticists and cell biologists is work in progress. Although we have not found a successful treatment yet, I believe we are on the way towards rational, mechanism-based treatments,” said Professor Hardy. “In the early 1980s, research into Alzheimer’s disease was a real backwater. The first conference only attracted 40 people, but now thousands attend. The pace of knowledge is very fast and the quality of science is excellent. Finding out about the interactions of the different types of cells in the brain is fundamental to our understanding of how the brain works.”

Professor Bart De Strooper is the Director of the UK Dementia Research Institute, at University College London, and Professor of Molecular Medicine at KU Leuven and VIB (Belgium), where he carried out the research that earned him his share of the prize. He discovered that presenilin is a protein that cuts other proteins into smaller pieces which is an important and complex process in normal cell signalling (the communication between cells). Mutations in the presenilin genes cause Alzheimer’s disease. He found that these mutations lead to the production of abnormal amyloid which is the main constituent of the plaques in the brains of patients with Alzheimer’s disease. He has deciphered in great detail what the mutations are doing and how they drive the disease process. “Treating amyloid very early could provide protection against the symptoms of Alzheimer’s in later life. But we have a ‘catch 22 situation’ in that we cannot do experiments in healthy people,” said De Strooper. “The Brain Prize recognises that basic science makes a real contribution, even though much of it cannot be directly applied to clinical care. The Prize is an important sign for young scientists to know that they can still make big discoveries, and that we urgently need them to pursue research into diseases of the ageing brain.”

Professor Michel Goedert is a Programme Leader at the Laboratory of Molecular Biology of the Medical Research Council in Cambridge and an Honorary Professor at Cambridge University. His work using human brain tissues, transgenic mice, cultured cells and purified proteins was instrumental in the discovery – despite considerable initial scepticism – of the importance of Tau protein for Alzheimer’s disease. When Tau acts abnormally, it assembles into clusters of filaments and becomes insoluble. A pathological pathway leading from soluble to insoluble filamentous Tau is believed to cause neurodegeneration. In his more recent studies, he showed that filamentous Tau clusters can propagate along nerve cell pathways through self-seeding. “Eventually – perhaps decades after seed formation – the first disease symptoms appear”, said Goedert. “Therefore, if you can halt propagation, that could lead to ways to prevent and treat disease.”

The one million Euro Brain Prize is awarded by the Lundbeck Foundation in Denmark. In 2018, the Prize will be awarded for the eighth consecutive year. The Brain Prize is a personal prize, awarded to one or more scientists who have achieved distinction through outstanding contributions to brain research. More information can be found on The Brain Prize website.

The Lundbeck Foundation is one of the largest, industrial foundations in Denmark with a market value of more than DKK 60 billion. The Lundbeck Foundation annually grants approx. DKK 500 million in support of Danish-based, biomedical research with a special focus on brain health as part of the foundation’s vision to create better lives through new knowledge.