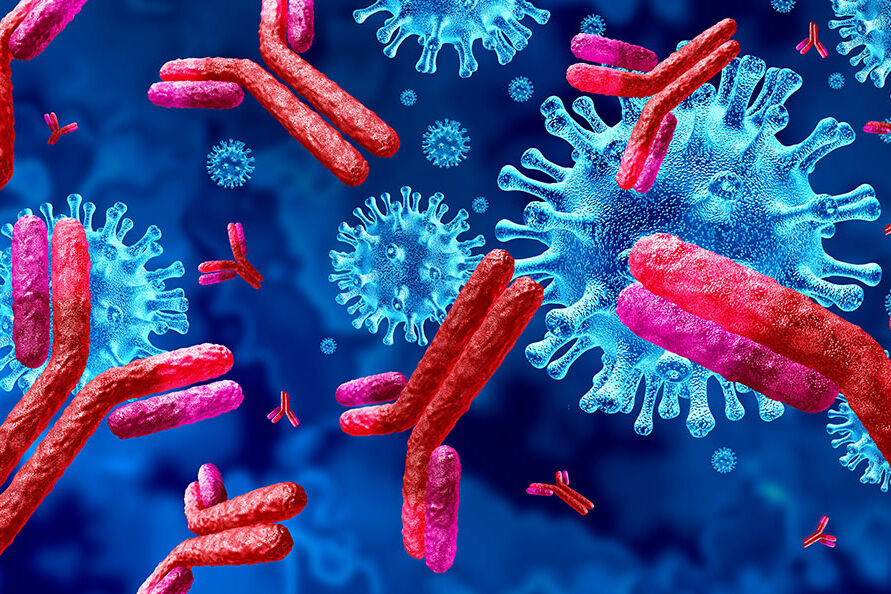 Symbol image of antibodies and viruses, not for editorial use. Source: freshidea - stock.adobe.com

Berlin/Germany, January, 25, 2022. In the journal “Science”, researchers from Deutsches Zentrum für Neurodegenerative Erkrankungen (DZNE) and Charité – Universitätsmedizin Berlin present new findings on the immune response against the coronavirus SARS-CoV-2. Their study is based on investigations of antibodies elicited by infection with the Beta variant of the virus. The researchers conclude that the Beta variant can confer broad immunity to multiple viral strains, which could be beneficial for protection against the currently prevalent Delta and Omicron variants, as well as against future viral variants. In their view, this aspect should be taken into account in the development of vaccination strategies.

“The Beta variant of the coronavirus shows marked differences from the wild type, the original strain of the virus. Until the emergence of the now dominating Omicron variant, it was the viral form that had evolved furthest from the wild type, against which the existing vaccines have been developed,” says Dr. Momsen Reincke, a researcher at DZNE and the Department of Neurology with Experimental Neurology on Campus Charité Mitte as well as one of the first authors of the current publication in “Science”. “We were interested in learning more about the exact antibody response to this variant – to see what conclusions can be drawn from this about the immune response to other variants. Since the coronavirus is likely to continue mutating, we were interested in whether the antibodies we found acted only against the Beta variant or had broader potential.”

Antibodies are proteins that the body uses to defend itself against pathogens. The human immune system can produce an almost inexhaustible variety of them by making use of various mechanisms: in particular, by repeatedly recombining the blueprints for the components of an antibody that are stored in the genome. “The immune response to coronavirus also produces a spectrum of antibodies that bind to different areas of the pathogen,” Reincke says. From an immune defense perspective, binding to the so-called spike protein is particularly effective. “In a nutshell, this is the hook that the virus uses to attach itself to body cells so that it can then slip in. Some antibodies bind to this protein and thereby render the hook useless. These are the neutralizing antibodies. In our study, these were exactly the antibodies we looked at.”

Replication in the Laboratory

The findings of the Berlin scientists are based on an analysis of antibodies that they isolated from the blood of 40 individuals. All patients had been infected with the Beta variant of SARS-CoV-2. Of the approximately 300 antibodies initially surveyed, 81 bound particularly strongly to the spike protein of the coronavirus. Reincke and his colleagues unraveled the genetic blueprints of the antibodies. This enabled them to understand which genes play a role in the assembly of these antibodies and to artificially produce these immune proteins for further studies. In doing so, they benefited from a project funded by the Helmholtz Association: the “BaoBab Innovation Lab”. Within the framework of BaoBab, they develop and refine technologies for the characterization and production of antibodies.

Effective against Delta and Omicron

It Depends on the Binding Site

Cross-reactivity could prove to be an important aspect of future vaccinations: “Individual antibodies against the wild type also have broad efficacy. This has been described in the literature and is also shown by studies in our laboratory. Taking together these data and our current findings, we conclude that antibodies generated against different viral variants can complement each other and thus jointly improve the potency of the immune response against emerging variants. Largest possible diversity in the antibody response seems to make sense,” says Prof. Dr. Harald Prüss, research group leader at DZNE and senior physician at the Department of Neurology with Experimental Neurology on Campus Charité Mitte. “Simultaneous or even sequential vaccination against different variants would likely provide enhanced protection against potential further forms of the coronavirus,” Kreye adds. “This approach could be relevant for the further development of vaccination strategies, because the pathogen can be expected to keep changing in the future.”

For the current studies, the DZNE research group lead by Prof. Harald Prüss collaborated closely with the team of Dr. Victor Corman at Charité’s Institute of Virology. Scripps Research in the US was also significantly involved.

About Deutsches Zentrum für Neurodegenerative Erkrankungen, DZNE (German Center for Neurodegenerative Diseases):
The DZNE is a research center that addresses all aspects of neurodegenerative diseases (such as Alzheimer’s, Parkinson’s and Amyotrophic lateral sclerosis) in order to develop novel approaches of prevention, treatment, and health care. It is comprised of ten sites across Germany and cooperates closely with universities, university hospitals, and other research institutions on a national and international level. The DZNE is publicly funded and a member of the Helmholtz Association of German Research Centers.

About Charité – Universitätsmedizin Berlin:Charité – Universitätsmedizin Berlin is one of the largest university hospitals in Europe, offering 3,001 beds and boasting approximately 100 departments and institutes spread across 4 separate campuses. With a total of 19,400 members of staff employed across its group of companies (16,400 of which at Charité), the organization is one of the largest employers in Berlin. At Charité, the areas of research, teaching and medical care are closely interlinked. 4,707 of its employees work in the field of nursing, with a further 4,693 in research and medical care. Last year, Charité treated 132,383 in- and day case patients, in addition to 655,138 outpatients. In 2020, Charité recorded a turnover of approximately € 2.2 billion (including external funding and investment grants) and set a new record by securing € 196 million in external funding. Charité’s Medical Faculty is one of the largest in Germany, educating and training more than 8,600 medical, dentistry and health sciences students. Charité also offers 577 training positions across 10 different health care professions. Within the field of academic medicine, Charité’s priorities are highlighted by its main areas of research focus: infection; inflammation and immunity including COVID-19 research; cardiovascular research and metabolism; neuroscience; oncology; regenerative therapies; and rare diseases and genetics. Examples of the work conducted by Charité researchers include involvement in 28 DFG Collaborative Research Centers (of which six are led by Charité), three Clusters of Excellence (of which one is led by Charité), 8 Emmy Noether Independent Junior Research Groups, 14 European Research Council grants and 9 European collaborative projects (coordinated by Charité).