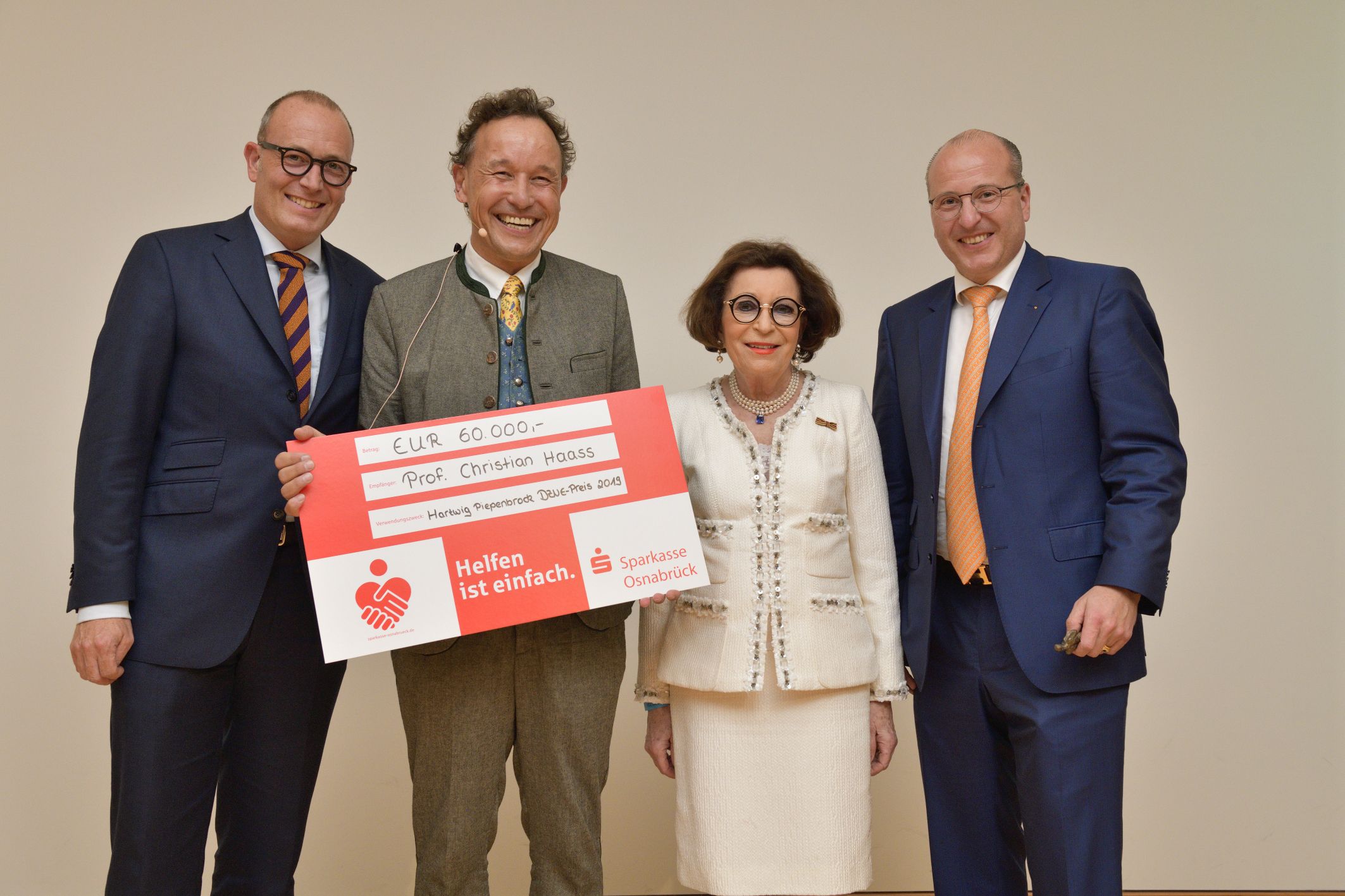 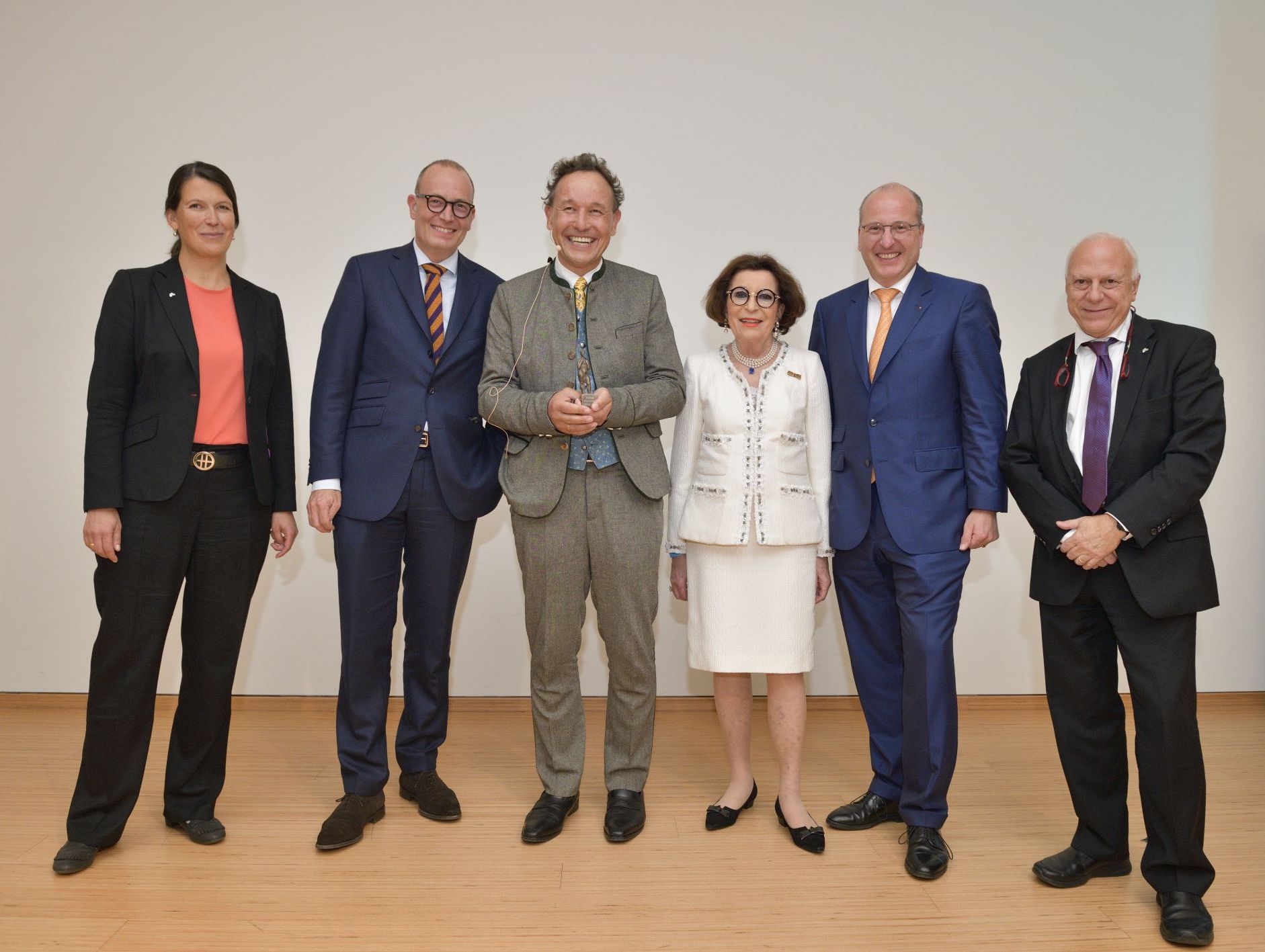 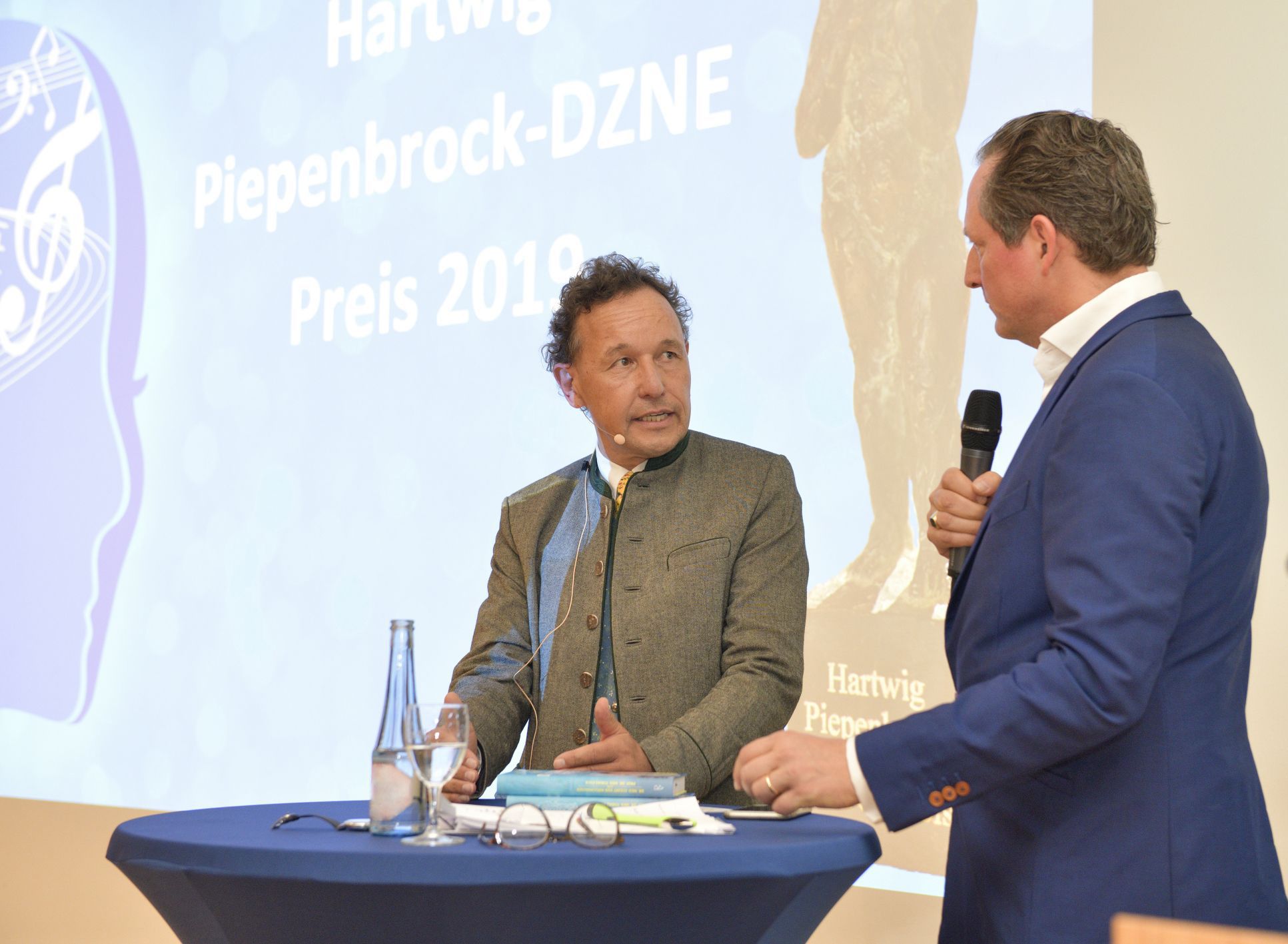 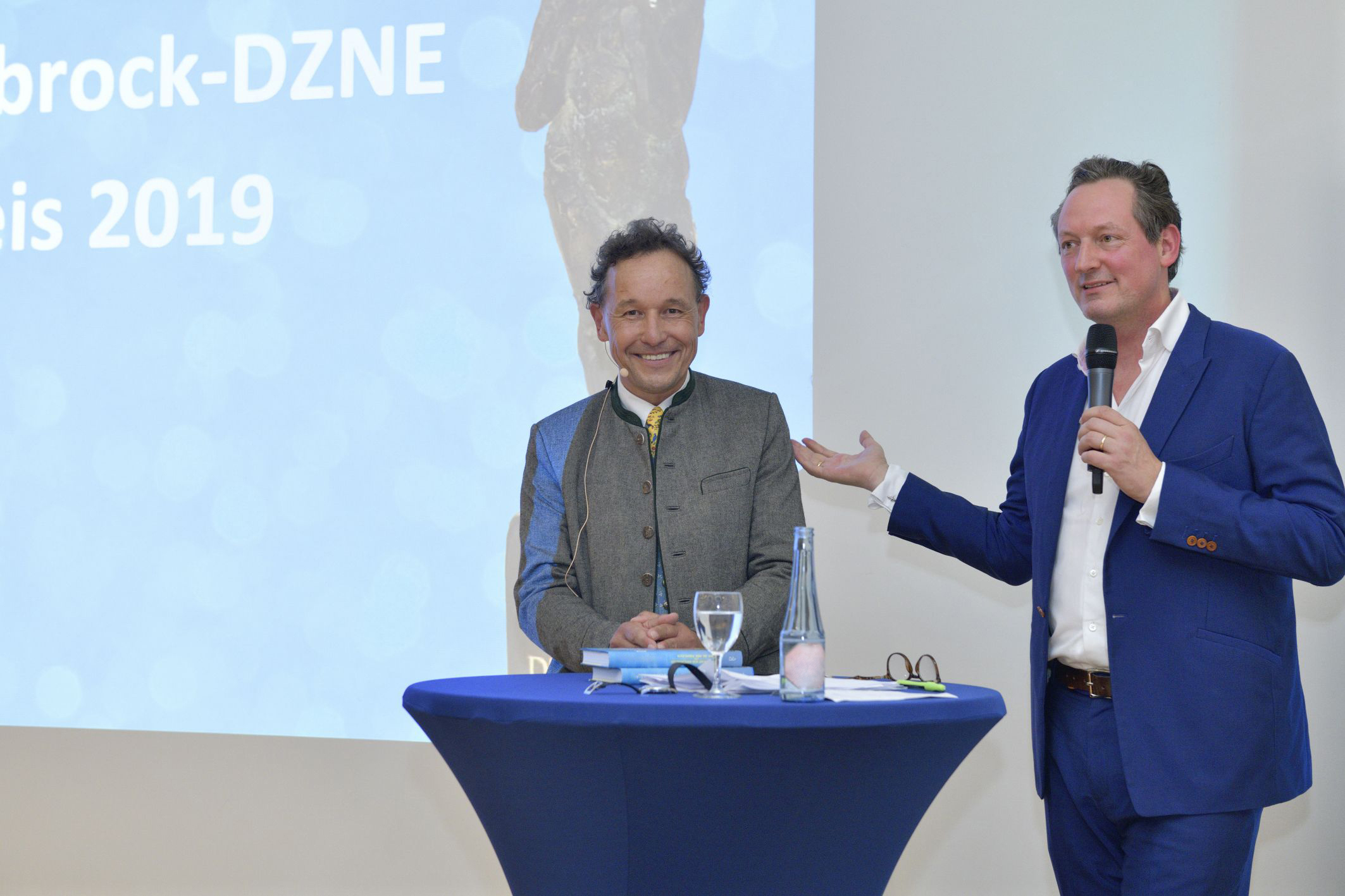 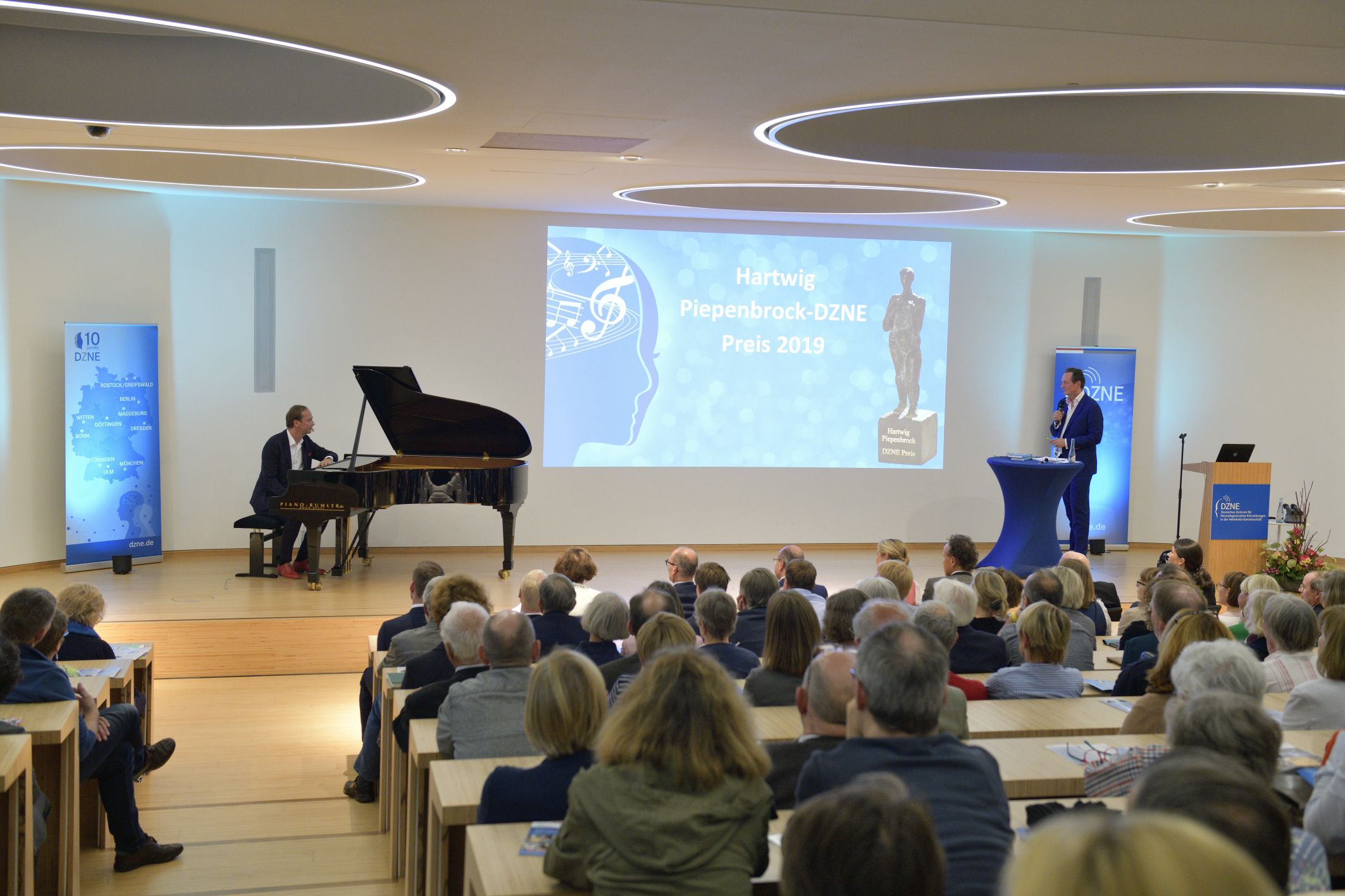 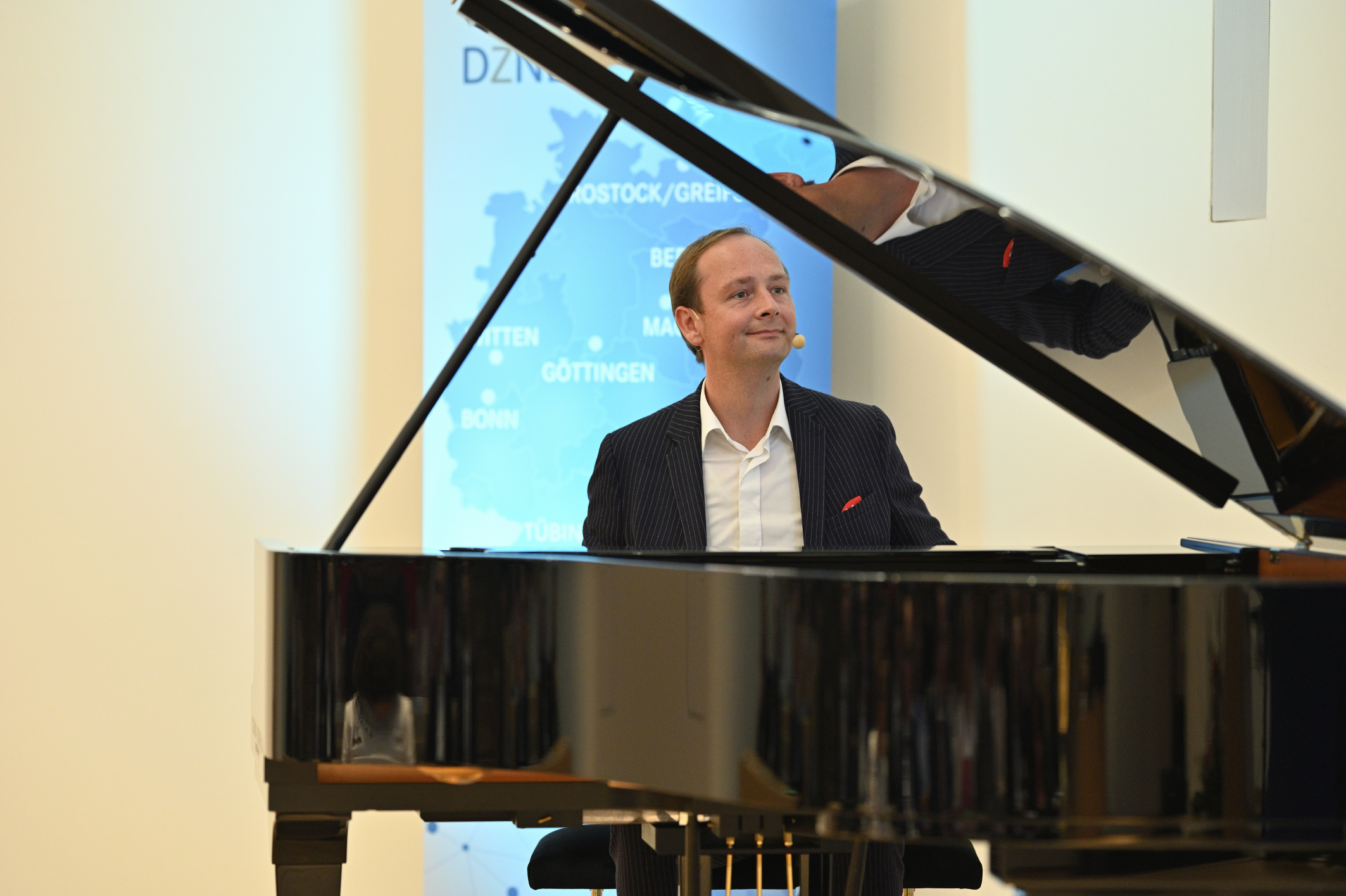 Bonn, October 1, 2019. The Munich biochemist Christian Haass has received the “Hartwig Piepenbrock-DZNE Prize” endowed with 60,000 euros. The company Piepenbrock and the German Center for Neurodegenerative Diseases (DZNE) thereby honor his groundbreaking research into the molecular mechanisms of Alzheimer’s disease. Haass is a professor at the Ludwig-Maximilians-University in Munich and site speaker for the DZNE Munich. The award was presented this Monday (Sept. 30) in Bonn. The event was hosted by TV presenter and medical cabaret artist Eckart von Hirschhausen.

“Christian Haass is one of the world’s leading experts on the molecular mechanisms of Alzheimer’s disease,” said Professor Pierluigi Nicotera, Chairman of the DZNE’s Executive Board. “We owe him groundbreaking insights into proteins and immune reactions involved in Alzheimer’s disease. Christian Haass has thus laid the foundations for new approaches in therapy and diagnosis. He has played a key role in Alzheimer’s research over the past 30 years and continues to do so today.”

“The ‘Hartwig Piepenbrock-DZNE Prize’ serves on the one hand to honor outstanding research achievements, on the other hand we would like to draw attention to Alzheimer’s and other neurodegenerative diseases and bring these topics into public discussion”, Olaf Piepenbrock, Managing Partner of the Piepenbrock Group, emphasizes. “With his research, Christian Haass has made a decisive contribution to developing new concepts for the early diagnosis and therapy of Alzheimer’s,” said Piepenbrock on occasion of the award ceremony in Bonn.

Since 2011, the “Hartwig Piepenbrock-DZNE Prize” has been awarded every two years for outstanding research on neurodegenerative diseases. These diseases, which include Alzheimer’s and Parkinson’s, are characterized by neuronal dysfunctions and the death of nerve cells. This may cause dementia, movement disorders or other health problems. The Prize is endowed by the Piepenbrock Group and awarded in remembrance of its former Chief Executive Officer and Chairman Hartwig Piepenbrock, who passed away after suffering from dementia. He was committed to the arts, science, and society for many years. The Prize winner is selected by an international committee, coordinated by the DZNE. This year, the Prize was awarded for the fifth time.

Background information on the laureate

Christian Haass, born 1960 in Mannheim, Germany, studied biology in Heidelberg. He then did research at Harvard Medical School in the USA, where he eventually became assistant professor of neurology. This was followed by a professorship at the Central Institute of Mental Health, Mannheim (University of Heidelberg). In 1999 he was appointed Professor of Biochemistry at the Ludwig-Maximilians-University (LMU) Munich and head of the Department of Metabolic Biochemistry. Since 2009, Haass has also been site speaker for the DZNE Munich.

At the beginning of the 1990s Haass started working on a small protein called “amyloid beta-peptide”. This molecule aggregates in the brains of people with Alzheimer’s and forms deposits (called “plaques”) in the tissue between the nerve cells. Contrary to what was thought at the time, Haass was able to prove that amyloid is not necessarily a component of pathological processes, but also occurs in the healthy brain. Today, it is therefore assumed that the production or degradation of this protein is disturbed in Alzheimer’s disease. In fact, Haass later discovered how genetic mutations associated with rare and early forms of Alzheimer’s cause overproduction of amyloid. As a result, this protein accumulates in the brain and the characteristic plaques develop. Haass’ research provided important insights into how amyloid is produced from a larger molecule (amyloid precursor protein) under the action of certain enzymes (secretases). His work and that of other scientists ultimately led to the formulation of the “amyloid cascade hypothesis”. According to this, amyloid plays an important role not only in the hereditary form of Alzheimer’s disease, by initiating a chain of events that ultimately leads to the death of brain cells. This also applies to the much more common, so-called sporadic variant of Alzheimer’s disease.

Christian Haass thus paved the way for therapeutic approaches aimed at preventing the formation of amyloid aggregates or promoting their degradation. So far, clinical studies based on this concept have not been able to stop memory decline. However, it is suspected that these therapy trials started too late. This is because individuals were treated, who already had symptoms of dementia. But damage to the brain begins many years before - long before symptoms manifest Therefore, therapies that target amyloid continue to be pursued as a possible strategy against Alzheimer's disease.

In recent years, Haass extended his research to other aspects of Alzheimer’s and investigated the role of the immune cells of the brain: the “microglia”. He found that a molecular switch (the TREM2 protein) triggers microglia to remove deposits of amyloid, particularly in the early stages of disease. Haass then developed a novel therapeutic concept. By acting on TREM2, this concept aims to promote degradation of amyloid aggregates through microglia. This approach is now being researched in cooperation with industrial partners. Haass also found that levels of TREM2 rise in the spinal fluid when microglia are activated. Accordingly, TREM2 could serve as a biomarker and contribute to the early detection of Alzheimer’s disease before symptoms manifest.

Christian Haass has already received several awards for his research including the Leibniz Prize of the Deutsche Forschungsgemeinschaft (German Research Foundation) and, most recently, the Brain Prize in 2018, the world’s most prestigious award for brain research.

Piepenbrock has represented professional building services for more than 100 years. Managed by the fourth generation of owners, Piepenbrock today offers a broad spectrum of services in Facility Management, Cleaning Services, Maintenance and Security. Piepenbrock is also one of Germany's leading providers of special services, which includes clean room cleaning, winter services and park maintenance. Quality and sustainability are two important aspects that ensure the company remains at the top of its game. Website: www.piepenbrock.de/en