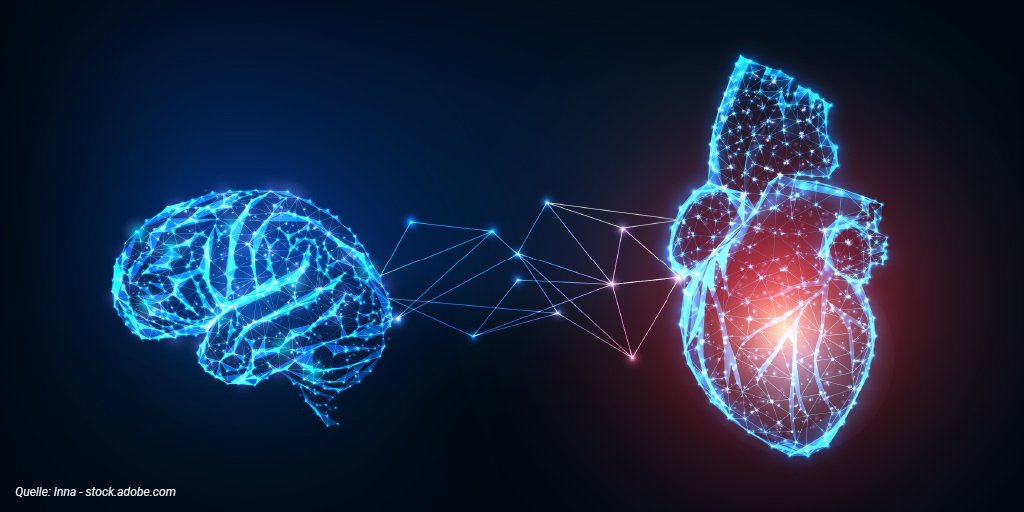 Decorative image, not for editorial use. Source: Inna - stock.adobe.com

Göttingen/Germany, February 26, 2021. Heart problems cause disturbed gene activity in the brain’s memory center, from which cognitive deficits arise. Researchers at the German Center for Neurodegenerative Diseases (DZNE), the University Medical Center Göttingen (UMG) and the German Center for Cardiovascular Research (DZHK) come to this conclusion based on laboratory studies. They consider that they have found a possible cause for the increased risk of dementia in people with heart problems. In mice, a specific drug which is known to affect gene activity alleviated the mental deficits. The involved experts see these results as potential approaches for therapies. The study data are published in the scientific journal “EMBO Molecular Medicine”.

In Germany, about four million people are affected by what is called “heart failure”: Their heart muscle is too weak to pump enough blood through the body and is therefore abnormally enlarged. Physical fitness and quality of life suffer as a result. Moreover, affected individuals have an increased risk of developing dementia. “People with cardiological problems and heart failure in particular may experience noticeable cognitive deficits and increased risk of developing Alzheimer’s disease. Possible reasons include impaired blood supply to the brain and dysfunction of the hippocampus, which is the memory’s control center,” explained André Fischer, research group leader at the DZNE’s Göttingen site and professor at the Department of Psychiatry and Psychotherapy at UMG. “Yet, there is a lack of therapies to effectively treat cognitive deficits in people with heart problems. This is because it is completely unclear which deficiencies are triggered in neurons. There was no data on this so far.”

Now, a team led by Prof. André Fischer and Prof. Karl Toischer (Clinic of Cardiology and Pneumology at UMG and DZHK’s Göttingen site) is presenting findings on this subject for the first time. The researchers observed in mice that impaired gene activity developed in the hippocampus as a result of heart problems. “In memory tests, mice with heart failure performed significantly worse than their healthy mates,” Fischer explained. “We then examined the neurons of the hippocampus. In the mice with heart failure, we found increased cellular stress pathways and altered gene activity in neurons.”

The genome of a mouse - and also of humans - comprises around 20,000 genes. In any given cell, however, only a part of them is active, switched on, so to speak. This is not a mere on or off state: the activity can be strong or less strong. This depends, among other things, on how tightly the DNA (the thread-like molecule that carries the genome) is wound and how accessible the genes on it are. In both mice and humans, the DNA is more than a meter long. But in a cell, the molecule is so tightly packed that it fits into the nucleus. “Genes can only be active if they are accessible to the cell’s machinery. To this end, the DNA needs to be wound a little more loosely at the relevant sites. This is similar to a ball of yarn with loops sticking out of it,” said Fischer. In the current study, the DNA was found to be more tightly wound in neurons of mice with heart problems than in healthy mates. Various genes important for hippocampal function were therefore less active than in healthy mice.

The scientists identified chemical changes in the histones as the cause of the tight winding. Histones are special proteins: The DNA wraps around them, much like yarn around a spool of thread. Fischer’s research group has been studying histones and other players that influence gene activity for quite some time - in technical jargon they are called “epigenetic mechanisms”. In this context, the researchers are also investigating drugs. In previous studies, they were able to show that the cancer drug “vorinostat” can alleviate genetically driven as well as age-related memory problems in mice. Currently, vorinostat is being investigated for the therapy of people with Alzheimer’s in a clinical trial of the DZNE. In the current study, the scientists treated mice with heart failure with this drug. They found that the heart’s pumping capacity did not change significantly, but memory performance improved.

“Vorinostat has been shown to act on histones and thus on gene activity. Our study thereby provides initial clues about the molecular processes that contribute to cognitive dysfunction following heart problems, and it indicates potential approaches for therapy,” Fischer commented on the results. “Fact is, however, that we do not yet understand why, as a result of heart failure, gene activity in the hippocampus is disturbed. What is the role of the deficient blood supply to the brain? Does the troubled heart release substances that affect the histones? We intend to investigate this in patients with heart problems. As with our current study, which involved experts from neuroscience and cardiac research, we aim to address these questions in an interdisciplinary way.”

The DZNE investigates all aspects of neurodegenerative diseases (such as Alzheimer’s and Parkinson’s and Amyotrophic lateral sclerosis) in order to develop novel approaches of prevention, treatment, and health care. The DZNE is comprised of ten sites across Germany and cooperates closely with universities, university hospitals, and other institutions on a national and international level. The DZNE is a member of the Helmholtz Association.