The immune system is supposed to protect against diseases. Sometimes, however, it becomes the aggressor itself: misdirected antibodies then attack the brain and destroy it. Therapies against these so-called autoimmune encephalopathies have been available for a few years.

For decades, three words hid a seemingly insoluble mystery for neurologists: "encephalitis without evidence of a pathogen" - for a long time, this was the diagnosis for many people who were in intensive care or had to be admitted to the psychiatric ward with brain inflammation. Something was attacking their brain, but no bacteria or viruses could be found that could have been the cause. It was only a few years ago that researchers were able to uncover the secret: Behind the symptoms are antibodies from the immune system that mistakenly attack the patient's own body.

"The antibodies are actually intended to attack in a completely different place," says Harald Prüß, who specializes in autoimmune encephalopathies - brain inflammations caused by misdirected antibodies. "When a patient has cancer, for example, antibodies are formed, some of which fight the tumor very efficiently. To do that, they dock onto certain proteins on the surface of the tumor cells and then destroy them." The problem is that some types of cancer form proteins on their surface that are otherwise only found in the brain. The antibodies therefore destroy not only the cancer cells, but also the healthy brain. The patient's own immune system turns from a protector into a highly aggressive enemy.

There is a reason why scientists speak of autoimmune encephalopathies in the plural: There are several forms of inflammation. Their primary difference lies in the specific structures against which the out-of-control antibodies are directed: The so-called NMDA receptors in the human brain are most frequently affected; sometimes it is against other molecules, against ion channels or further target points in the brain. "Fifteen specific antibodies are now well studied, and another 15 to 25 are under observation as suspicious," says Harald Prüß. "And basically, each of them evokes a new disease of its own." The mechanisms of action are similar in each case, but the symptoms are completely different - and so are the groups affected: A common encephalitis is caused by so-called LGI1 antibodies and mainly affects men in their mid-50s and older, and the NMDA receptor variant often strikes younger women and children. 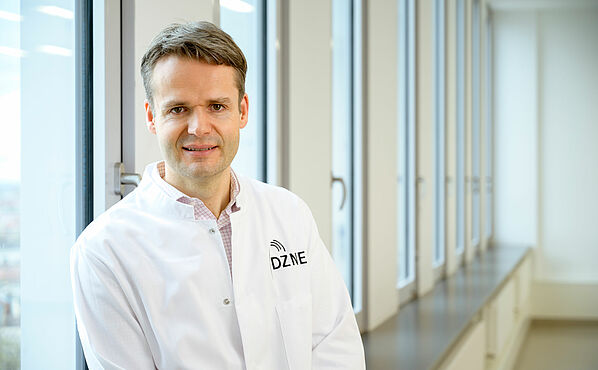 There are several forms of inflammation. And basically, each of them causes a new disease of its own.

This NMDA receptor variant is the encephalitis that led scientists to discover the unknown phenomenon a little more than a decade ago. A cancer doctor was surprised that many of his patients were affected twice: First, they developed ovarian tumors - and soon after, the brain became inflamed in a third of them. He then found the antibody that attacked both the tumor and the brain cells. Gradually, the researchers were then able to unravel the mysteries of autoimmune encephalopathies. They found that not only cancer patients are affected, but by far the most common is when the disease strikes seemingly out of the blue. The potentially dangerous antibodies are apparently present in the blood of many people - but mostly the so-called blood-brain barrier functions. It prevents substances from the blood from entering the brain, where they can cause damage. In some people, however, this natural barrier inexplicably fails.

Encephalitis is a devastating diagnosis for those affected: in the past, those who had a severe course ended up in intensive care and often had to be artificially ventilated - with little chance of improvement, because the brain was often irreversibly damaged. Sometimes the inflammation led to psychiatric changes; patients were admitted to psychiatric wards for the disorders with supposed schizophrenia or other psychoses. "Yet we now know that these disorders are treatable if they are triggered by their own antibodies," says DZNE expert Harald Prüß, who also works as a senior physician at Berlin's Charité hospital. Often, for example, the blood is washed to remove the misdirected antibodies from it; in other cases, doctors resort to immunotherapy. This involves artificially shutting down the entire immune system - a therapy with many risks, but also great opportunities. "For example, I had a patient who was affected at a young age. She was in intensive care for a year," says Harald Prüß. "But the therapy worked, she subsequently completed a degree and today leads a largely normal life."

Harald Prüß now envisages a new therapy that would switch off only those cells in the human body that produce the misdirected antibodies, and no longer the entire immune system. Initial progress has already been made: thanks not least to a Helmholtz Association project called BaoBab ("Brain antibody-omics and B-cell Lab"), the researchers are able to read out the blueprint of the aggressive antibodies, so to speak. This also allows them to determine how to stop the attack on their own bodies.

The deeper Harald Prüß and his team delve into the mysteries of autoimmune encephalopathies, the more connections they discover. For example, they found evidence that they can even be transmitted during pregnancy: Antibodies from the expectant mother then dock on the embryo's brain and take it under fire. This can presumably lead to neurobiological developmental disorders or psychiatric diseases - from autism to ADHD. "The embryos are apparently not protected, while the autoantibodies in the mother herself fail at the blood-brain barrier," explains Harald Prüß. As yet, this is still a matter of suspicion. "However, if future research results confirm our thesis, tests for such antibodies should be included in prenatal care. One could then initiate treatment to remove the autoantibodies, if necessary, to prevent effects on the child's health."

In Germany, experts estimate that 8 to 15 out of one million people contract autoimmune encephalitis each year. Today, these diseases are usually detected in time: They can be detected with normal tests of the blood or cerebrospinal fluid (CSF). Whereas ten years ago only proven experts even knew of the existence of this clinical picture, today the clarification of many neurological complaints is part of the standard repertoire. In any case, Harald Prüß has not read the infamous three words about "encephalitis without pathogen detection" for a long time. Only a few years ago did he see the phrase again: in a newspaper article dealing with the death of the Berlin polar bear Knut.

The public favorite of the Berlin Zoo had fallen into a ditch during an epileptic seizure and drowned. His death triggered great public sympathy - and presented the veterinarians with a mystery: How could it be that the previously healthy bear suddenly went off the rails? "They examined and autopsied him and when I read the final findings of 'encephalitis without pathogen detection' in a newspaper article, my alarm bells immediately rang," recalls Harald Prüß. He contacted the veterinarians, and together they reopened the case and analyzed blood and cerebrospinal fluid samples. Soon they were able to determine: He had indeed fallen victim to autoimmune encephalitis, Knut the polar bear - and thus became probably the most prominent and hopefully also one of the last untreated victims.